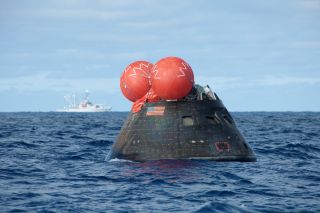 NASA's Orion spacecraft floats in the Pacific Ocean after its first uncrewed test flight on Dec. 5, 2014. The capsule was retrieved by the U.S. Navy's USS Anchorage.
(Image: © U.S. Navy)

Orion launched to space for the first time on Friday (Dec. 5), zooming 3,600 miles (5,800 kilometers) from Earth and then barreling back home to test out the capsule's heat shield, avionics and other key systems during an unmanned flight NASA called Exploration Flight Test-1.

The president took note of the spaceflight success, which marked the farthest a human-spaceflight vehicle has traveled since the end of NASA's Apollo program in 1972.

"I'm sure you were all as proud as I was to see Orion's first sucessful flight test last Friday," President Obama said Tuesday during a speech to the Senior Executive Service, a group of high-ranking federal civil servants.

NASA is developing Orion to help get astronauts to a captured near-Earth asteroid by 2025, then on to Mars by the mid-2030s. The efforts of Orion chief engineer Julie Kramer White and the rest of the Orion team are helping make these big dreams a reality, the president said in his speech.

"America was already the first nation to land a rover on Mars," Obama said. "When an American is the first human to set foot there, we'll have Julie and her team to thank. And at that point, I'll be out of the presidency, and I might hitch a ride."

On Friday, Orion launched atop a United Launch Alliance Delta IV Heavy rocket. But in the future, it will be lofted by NASA's Space Launch System megarocket (SLS), which is currently in development.

If all goes according to plan, SLS will blast an unmanned Orion on a seven-day mission around the moon in 2017 or 2018. The duo's next mission will launch astronauts out to an asteroid that has been towed into lunar orbit by a robotic probe. That flight could come as early as 2021, depending on the status and progress of the precursor "asteroid redirect mission," which is still in the planning stages.