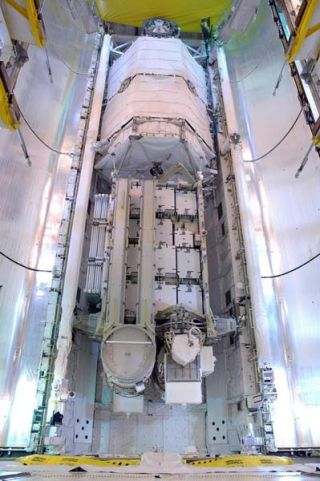 On Launch Pad 39B, Space Shuttle Atlantis' payload bay doors are being closed for launch. Inside is seen the orbiter's cargo, the 17-and-a-half-ton P3/P4 truss segment for the International Space Station.
(Image: © NASA/Jim Grossmann.)

The mainconcern for launch involves anvil clouds, electrically charged cloudsassociated with thunderstorms, which could be within 20 nautical miles (37 kilometers),of the Kennedy Space Center (KSC). The clouds can spawn lightning duringshuttle flight and must be clear of NASA'sShuttle Landing Facility should Atlantis be forced to make an emergencylanding.

Weatherwilling, Atlantis' STS-115 astronaut crew will carry a new pairof solar arrays and a 17.5-ton set of trusses to be installed on the portside of the ISS.

Winterssaid weather experts are also watching Tropical Depression 5, which is movingthrough the Caribbean. The storm may strengthen into Tropical Storm Ernestosoon and become a Category 1 hurricane by next week, as it builds strength inthe Caribbean. While the depression is not expected to impact the launch ofAtlantis, it could affect the KSC launch site or even NASA's Houston, Texas-basedshuttle and ISS mission control operations at Johnson Space Center.

"It couldbe a threat to any of those locations," Winters said, adding that the next fewdays will shed more light. "Everybody's just monitoring the situation."

Stormyweather has already impacted Atlantis' launch preparations, though it appearsto be the only concern facing launch controllers at this time.

"There areno smoking guns that I'm aware of, so to speak," NASA test director PeteNickolenko said during the briefing. "Technically, the vehicle is in greatshape."

Aside fromweather, no technical issues have popped during the STS-115 launch countdown.One leftover item - final analysis of an auxiliary power unit (APU) glitch onAtlantis' sister ship Discovery - will be presented to the spaceflight'sMission Management Team (MMT) during a launch readiness review later today. Theissue is expected to be cleared at that time, shuttle officials said.

"All of ourteams are ready and their focused," Nickolenko said. "We're all looking forwardto launch on Sunday and the return to [ISS] assembly."