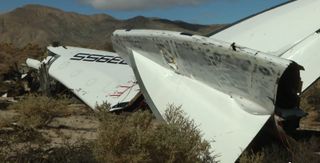 British billionaire Sir Richard Branson had hoped to ride SpaceShipTwo with his two adult children as early as next year, kicking off Virgin Galactic's first commercial flights to suborbital space.

But last Friday (Oct. 31), during a rocket-powered test flight from California's Mojave Air and Space Port, SpaceShipTwo broke apart in midair, leaving one pilot dead and another seriously injured.

Industry experts are adamant that the fatal accident doesn't spell doom for space tourism, though it is a major setback for Virgin Galactic, and the 10-year-old company will likely have to answer key safety questions in the months and years ahead. [Virgin Galactic's SpaceShipTwo Crash: Full Coverage]

Three days earlier, another commercial spaceflight company, Orbital Sciences Corp., lost its Antares rocket as it launched from the coast of Virginia. The rocket exploded moments after liftoff on Tuesday night (Oct. 28), destroying Orbital's unmanned Cygnus spacecraft, which was bound for the International Space Station to deliver cargo for NASA.

The causes of both accidents remain unclear.

"Space is hard, and today was a tough day," Virgin Galactic CEO George Whitesides told reporters during a news conference Friday. "We are going to be supporting the investigation as we figure out what happened today, and we're going to get through it."

"The precious life that was lost cannot be replaced and will never be forgotten," Commercial Spaceflight Federation President Eric Stallmer said in a statement. "The courage of both pilots will serve as inspiration for us all to continue to meet the challenges of spaceflight with clear focus and determination in order to make it as safe and reliable as possible."

Stallmer's predecessor, former NASA astronaut Michael Lopez-Alegria, who is now an independent consultant, said in an email: "I'm confident that the commercial spaceflight industry can and will survive this and the obviously unrelated but tragically coincidental Antares launch failure."

The future of commercial space

Other experts said it would be unwise to try to predict the future of the commercial spaceflight industry from the twin disasters. [The Top 10 Private Spaceships]

"I think the only thing they have in common is the word 'private,'" said John Logsdon, a space-policy expert and professor emeritus at George Washington University in Washington, D.C. "The two accidents have virtually nothing to do with one another, and drawing broad conclusions from them is a red herring."

Orbital Sciences signed a $1.9 billion contract with NASA in 2008 to fly eight unmanned cargo missions to the space station using Antares and Cygnus. The Dulles, Virginia-based company, which was founded in 1982, successfully completed its first two official missions this year.

Virgin Galactic's business is in the fledgling field of space tourism. The company has a list of more than 700 customers who have paid up to $250,000 each for a brief ride to suborbital space aboard the six-passenger, two-pilot SpaceShipTwo.

Virgin Galactic had planned to have a fleet of fiv­e of those spacecraft, made by the Mojave-based company Scaled Composites.

Both of the pilots aboard SpaceShipTwo Friday,Michael Alsbury and Peter Siebold, were Scaled Composites employees; Alsbury was killed and Siebold remains in the hospital.

Friday's tragic crash was not the first fatal accident during the development of SpaceShipTwo. In 2007, three Scaled employees were killed during a tank explosion on the ground.

Virgin Galactic has repeatedly pushed back its estimated start date for commercial flights, and the company never announced when SpaceShipTwo would reach its maximum altitude.

SpaceShipTwo is designed to be carried to an altitude of 50,000 feet (15,000 meters) underneath its mothership, WhiteKnightTwo. After the space plane is released, it is supposed to blast off to 62 miles (100 kilometers) above the planet.

During the last rocket-powered flight, in January, SpaceShipTwo soared to its highest-yet altitude of 71,000 feet (21,641 m). Friday marked the 55th test flight and fourth powered flight of SpaceShipTwo. Experts say these types of experimental flights are inherently risky.

"The nature of test flights is that failure is one of the possibilities," Logsdon said. "If you look at the history of test flights of high-performance airplanes, there have been a lot of accidents. It's unfortunate but not totally unexpected." [Photos of SpaceShipTwo's Test Flights]

But Virgin Galactic's goal to begin commercial flights in 2015 seemed to imply a relatively low number of planned test flights, Logsdon added. Once Virgin Galactic has another aircraft to work with, they'll likely have to conduct an extensive set of test flights to convince people that they're safe, he said.

Thus far, the private space industry has resisted oversight from federal regulators, but that could change in the wake of the accident.

"I suspect there will be pressure for tighter regulations," Logsdon said.

In 2012, Congress passed a bill that extended the "learning period" for the commercial spaceflight industry. The measure was championed by Congressman Kevin McCarthy, a Republican from California, whose district covers the Mojave spaceport.

The provision essentially prohibited the U.S. Federal Aviation Administration's Office of Commercial Space Transportation, dubbed AST, from issuing regulations designed only for the protection of passengers until October 2015. The idea behind this hands-off approach was to allow the spaceflight industry to gain real-world data from their first licensed commercial launches; the FAA would, in turn, use this information to eventually craft regulations.

In the wake of the accident, Virgin Galactic and the National Transportation Safety Board — the federal agency leading the investigation — have warned against speculation until the ongoing investigation is complete. But critics have made strong claims about risks the company took.

Tom Bower, a biographer of Branson, told BBC Radio 4 that the accident was "predictable and inevitable." Joel Glenn Brenner, a former Washington Post reporter who has been following Virgin Galactic's progress, made similar charges shortly after the accident in an appearance on CNN, adding: "I don't see them at least being able to carry anybody into space in the next 10 years."

Andrea Gini, of the Netherlands-based International Association for the Advancement of Space Safety, criticized Virgin Galactic for a lack of transparency about its safety procedures.

"We don't know how Scaled Composites approached this particular test," Gini told Space.com in an email. "Virgin Galactic has always refused to participate to the public discussion inside the space safety community, and has never sought the support of independent reviewers."

Gini said there are elements of Virgin Galactic's flight design that experts consider hazardous. The decision to fly passengers and even crew without pressurized space suits, for example, could expose them to risk of decompression, he said.

"Space is, and will always be, a risky industry," Gini said. "But it is not a new one. I believe that commercial operators should approach it with transparency and humility, or their business, and not just their vehicles, will be doomed to failure."

Still, commercial space industry advocates worry that regulations could put stifling restrictions on the suborbital flight industry before it ever gets off the ground.

Charles Lurio, a space industry analyst who publishes The Lurio Report, said, if anything, Virgin Galactic's accident illustrates the need for more players in the commercial space industry to make technologies like suborbital flights practical and safe.

"We just have two companies that are realistically in the game for suborbital human spaceflight, and what they're fighting against is the momentum of people thinking it's so impossibly hard that only a massive agency can try it," Lurio told Space.com.

Besides Virgin Galactic, XCOR Aerospace is currently developing a suborbital system; tickets for a ride on XCOR's one-passenger Lynx space plane, which is also designed to fly to an altitude of about 62 miles (100 kilometers), are selling for $100,000.

"The wrong lesson would be to conclude it's too dangerous to try these new paths," Lurio said. "We should have not two companies but 10 companies trying out suborbital systems."

It could be months, or even a year, before investigators know what went wrong during Friday's fatal flight. Officials with the NTSB said they would likely spend up to a week examining the crash site, then another 12 months interpreting their findings.