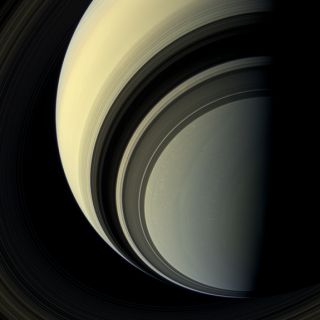 The spectacular rings of Saturn cast dark shadows on the ringed planet as the winter season approaches in Saturn's southern hemisphere in this view from the Cassini spacecraft. With the cold season comes a blue hue on Saturn that is likely caused by a drop in ultraviolet sunlight and haze it produces. This image was taken on July 29, 2013 and released on Dec. 23.
(Image: © NASA/JPL-Caltech/Space Science Institute)

Mark Sykes is the CEO and director of the Planetary Science Institute. This Op-Ed was expanded from Sykes's Congressional testimony. He contributed this article to Space.com's Expert Voices: Op-Ed & Insights.

For decades, the American program for solar-system exploration has been a constant source of discoveries, deepening humanity's understanding not only of neighboring worlds, but also our own planet. Astronomers are now discovering hundreds of worlds around other stars, while at the same time those observations and others are providing new insights into how our solar system formed and evolved. We can now ask the question of whether life has arisen on Mars and beneath the surfaces of Europa, Ganymede, the dwarf planet Ceres and other solar system bodies.

We have been coasting on the commitments made in the 1990s when we had a vigorous Discovery mission program, which was decimated after the selection of the Dawn and Kepler missions in 2000. The regular cadence of Mars missions every two years also came to an end in 2008 with the selection of MAVEN , which recently arrived at Mars for its one-year mission. Missions take years to develop and execute, but ultimately they do come to an end, and the prospect of that looms before us.

The National Research Council (NRC) planetary decadal survey has recommended a balanced program of small to large NASA mission classes within the decade 2013-2022 including five Discovery missions (the smallest class), two New Frontiers (medium class) and one Flagship (large class), financial resources permitting. This represents half the pace of the first decade of Discovery missions beginning in the 1990s, and by merging Mars missions into Discovery the decadal recommendations actually represent a significant retrenchment from earlier U.S. solar-system exploration ambitions. But the decadal recommendations are still far ahead of where we are today.

The Obama administration strongly and publicly supported the decadal survey recommendations, then in 2013 slashed NASA's planetary science division budget by 20 percent, and insured those recommendations could not be implemented. Compounded by programmatic uncertainties and questionable management practices, U.S. solar system exploration is now on the ropes.

The decadal survey recognized that the fiscal environment could be worse than its authors assumed when they provided their recommendations. Those authors took the remarkably responsible position of identifying priorities in the implementation of the recommendations. Delaying the large Flagship missions and limiting their scope would be the first course of action. Unfortunately, the administration wishes to keep the planetary budget reduced while also shoehorning in a new Flagship mission, threatening the remainder of the program.

Fortunately, there have been strong advocates in the U.S. Congress pushing to restore the NASA planetary budget, which is the only means by which the balanced program proposed by the decadal survey can be achieved, including a Flagship mission. The Obama administration needs to join Congress in agreeing to a restoration of the planetary budget, and it needs to realign its planning to be consistent with recommendations of the recent NRC planetary decadal survey.

However, more money does not cure all. The NASA planetary science division still suffers from programmatic uncertainty and questionable management practices.

Consider those exploration efforts that are extending their missions. Congress mandates that such activities be regularly reviewed to ensure continued value to gained for the investment made. This is accomplished through the "senior review" process. So, it was good news to hear that the administration decided, on the basis of a recent senior review, to continue seven planetary missions in extended operations — Cassini, Mars Opportunity Rover, Mars Reconnaissance Orbiter, Mars EXPRESS (led by the European Space Agency), Mars Odyssey, and the Mars Science Laboratory (Curiosity). Yet, in its Fiscal Year 2015 NASA budget request, the administration requests funding for only two of those — Cassini and Curiosity. The request is short the $35 million needed to fund the remaining missions. The administration is seeking these funds through a different appropriations request — the Opportunity, Growth, and Security Initiative — which lumps together additions to discretionary spending across the entire federal budget.

The United States began, and may end, the new fiscal year with a predictable continuing resolution. Recent history in congressional cooperation gives little hope that the new initiative will pass. So, where will the money come to support the five, unfunded, extended missions? The answer is that other programs within the NASA Planetary Science division will have to be cannibalized, beginning now. Does the administration consider this competent planning?

The senior review process in NASA's planetary science division came under withering fire from the NASA Office of the Inspector General, which noted many instances of a failure to document rationales for budget guidelines and no documented rationale for its inclusion and exclusion of some missions from the process or a given funding period. Some mission participants complained of receiving budget targets late, making it difficult for those missions prepare proposals for the senior review in the time available. This suggests sloppy processes, reflecting a desire to avoid responsibility for decisions by NASA management.

It is arguable that the highest priorities of the planetary decadal survey are the least sexy planetary programs funded by the agency: the research and data-analysis programs. The survey recommended small, but steady, growth over inflation through the decade, and if the fiscal situation were to sour, it recommended research and data-analysis programs (along with technology development programs) be kept stable, effectively at the expense of missions when times are bad. The research and data programs are the "seed corn" initiatives that provide the scientific context for understanding data returned from missions, and those efforts allow the research community to identify where to allocate future mission resources. Those programs are also essential to training the next generation of American planetary scientists. Yet, the planetary community is constantly told by the administration that funding for those programs is uncertain (usually placing the blame on Congress, which has been a stalwart supporter of those programs).

There has been much disruption this past year as the NASA planetary research programs have undergone substantial reorganization, apparently for no strongly supported reason. The net number of programs have only been minimally reduced, while the complexity of some have exploded. There is a question of whether some previously funded sub-disciplines might fall through the cracks as the traceability of activities from old to new programs has been opaque.

With the largest planetary research program (Solar System Workings), the administration has notified scientists not to expect funding of new awards for a year after proposals are submitted. (Almost all other programs are expected to be funded within six months of proposal submission). The reason was articulated by Planetary Science division director James Green at a town hall meeting in December 2013: NASA is interested in preserving the ability to delay funding of all new awards in Solar System Workings from fiscal 2015, when they would normally be funded, to fiscal 2016. This effectively creates a contingency fund for the division — which would be at the expense of extended funding gaps for scientists.

Is this part of the motivation for the reorganizing the research programs? Is this part of the administration's plan to cover insufficient funds for its extended missions? Certainly, funding for a new Flagship initiative in the context of a reduced NASA planetary budget requires "contributions" at all levels.

In addition to restoring the NASA Planetary Science division budget, it would make sense to reorganize it into two broad categories: baseline and flagship.

The Flagship line would include study costs, instrument development, the missions themselves and the science activities and data analyses associated with them. Flagships are of great value, but their large expense and cost volatility (which is expected for such ambitious projects) dictate that they should be isolated from other planetary science division activities. That change would make it easier to avoid continuing collateral damage to baseline programs from Flagship-related activities. It would also be easier to realize the recommendations of the decadal survey, including its prioritization of those recommendations in difficult times, if need be.

With our aging spacecraft, the United States is still the pre-eminent nation in the exploration of the solar system, but we have been riding on past commitments and past investments, and that will come to an end soon. The nation needs to restore the NASA planetary budget. We need to restore our investments in small, competed missions. We need to keep our research programs stable. We need planning and management that is competent, transparent and honest. We cannot afford to wait until the next administration.

Sykes's most recent Op-Ed was "The Obama Legacy in Planetary Exploration." Follow all of the Expert Voices issues and debates — and become part of the discussion — on Facebook, Twitter and Google+. The views expressed are those of the author and do not necessarily reflect the views of the publisher. This version of the article was originally published on Space.com.