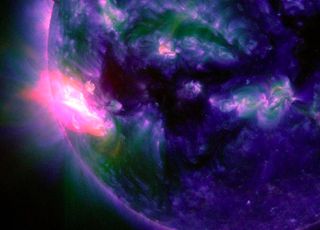 A monster solar flare erupted early Sunday (Oct. 19) from a huge sunspot that may just be getting warmed up.

The sun fired off an X-class solar flare — the most powerful type — that peaked at 1:01 a.m. EDT (5:01 GMT) Sunday. NASA's Solar Dynamics Observatory (SDO) spacecraft captured photos and video of the intense sun storm, which researchers classified as an X1.1 flare.

The flare erupted from a sunspot called AR (Active Region) 2192, which has since grown to become 78,000 miles (125,000 kilometers) wide, according to Spaceweather.com — almost as big as the planet Jupiter.

"Since [Sunday's flare], the sunspot has almost doubled in size and developed an increasingly unstable 'beta-gamma-delta' magnetic field," Spaceweather.com's Tony Phillips wrote in an update. "It would seem to be just a matter of time before another strong explosion occurs."

AR 2192 has been pointing away from Earth, so its outbursts to date have not affected the planet much. But that could change soon; the sunspot is now rotating around toward Earth, Phillips added.

Solar flares are bursts of energetic radiation that can cause temporary radio blackouts and affect the precision of GPS (Global Positioning System) satellite measurements. Scientists classify strong flares into three categories, with C being the weakest, M medium-strength and X the most powerful.

Flares are often accompanied by coronal mass ejections (CMEs), clouds of super-hot solar plasma that rocket through space at millions of miles per hour. Earth-directed CMEs can cause geomagnetic storms that can disrupt power grids and radio communications, and also amp up the beautiful auroral displays known as the northern and southern lights.

Sunday's flare was far from the strongest of the year; the sun blasted out an X4.9 flare in February. (X4 flares are four times more intense than X1 flares.)

The sun is currently near the peak of its 11-year activity cycle, which is known as Solar Cycle 24. But the current solar max is the weakest one in a century or so, scientists say.