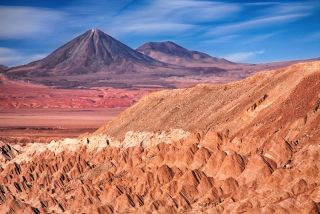 Frigid lakes bombarded by UV radiation and boiling, acidic springs are some of the otherworldly Earth environments where scientists plan to hunt for clues to life on Mars.

Funded by a new, five-year NASA grant, the researchers will tour the three ages of Mars on Earth — when Mars was cold, wet and habitable; the transition period when water disappeared; and the modern, dry period. The Mars-like environments include hot springs in California and Yellowstone National Park, permafrost on cold Arctic islands, some of Earth's oldest rocks in Australia, and volcanic lakes and soils in Chile. [Out-of-this-World Photos: Finding Mars on Earth]

"We chose these environments because we want to understand the signature of life on Mars at different times," said Nathalie Cabrol, the project leader and a senior research scientist at the SETI Institute in Mountain View, California.

The SETI-led team will scope out "biosignatures," or evidence of life, with instruments similar to those NASA plans to install on the next Mars rover, expected to launch in 2020. The car-size robot is designed to seek out ancient life.

On Mars, the clues could be concealed in rocks more than 3.5 billion years old. If the planet's ancient environment was akin to that of early Earth, then the rover might discover fossils of microbial mats similar to stromatolites, which are some of Earth's oldest fossils. Or primitive microbes could have left behind chemical calling cards, such as the altered minerals created by rock-eating bacteria known as chemolithotrophs. The rover may also find subtle shifts in carbon, hydrogen and nitrogen isotopes, trapped and preserved in rock layers, which can signal the presence of life. (An isotope is an atom of an element with a different number of neutrons.)

Cabrol and her team will practice searching for promising rocks from the air, by scanning sites with a quadcopter or octocopter, she said. They'll also analyze samples in the field with portable instruments, and in a laboratory for more-precise measurements.

"Our goal is not to prove more efficient at finding biosignatures," Cabrol told Live Science. "We want to get metrics and data that will lead us to detection."

By honing their skilles in Earth's extreme environments, the scientists will learn where and how to look for life for when the rover arrives at Mars. The research may also help narrow down the list of best landing sites for the rover.

The $8 million grant is one of five awarded to seven research groups across the United States to study the origin of life. The teams will be affiliated with NASA's Astrobiology Institute at Ames Research Center in Moffett Field, California.