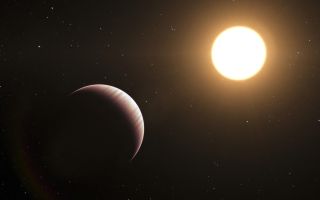 Artist's impression of the huge alien planet Tau Bootis b, which orbits much closer to its star than Jupiter or Saturn do to the sun.
(Image: © ESO/L. Calçada)

Some huge alien worlds were probably pulled into their puzzling orbits by nearby planetary neighbors circling on a different plane, a new study reports.

Dawson and co-author Eugene Chiang, also of UC Berkeley, investigated "warm Jupiters," enormous exoplanets that orbit much closer to their host stars than Saturn and Jupiter do in Earth's solar system (but not as close as "hot Jupiters," some of which can complete one lap around their parent stars in less than a day). [The Strangest Alien Planets (Gallery)]

Warm and hot Jupiters must have migrated inward significantly, astronomers say, because theory predicts that gas giants can only form relatively far from their stars — generally, beyond the "snow line," where it's cold enough for water and other volatile materials to condense into ice grains. But just what's driving such dramatic planetary movement has been a matter of debate.

Dawson and Chiang looked at six exoplanetary systems, each of which harbors a warm Jupiter with a large, more distantly orbiting planetary companion. For each system, they ran about 1,000 computer simulations that modeled the two planets' orbital dynamics.

The results suggest that when the two worlds' orbits are inclined at a certain angle relative to each other — between 35 and 65 degrees — the companion can push the warm Jupiter closer and closer to its star.

"In the type of evolution we studied, some warm Jupiters are in the midst of a slow evolution and may one day become hot Jupiters," Dawson told Space.com via email. "There are other channels for forming hot Jupiters, and in the future, we plan to quantify what fraction of hot Jupiters may come through this channel."

The origin of such worlds' mutually inclined orbits is another mystery, since planets are thought to form in the same plane from a flat disk of dust and gas surrounding a newborn star. Gravitational interactions among young planets may yank some of them askew, leading to tilted orbits, Dawson said.

"I wouldn't say flat systems are rare; the compact systems of small planets discovered in abundance by the Kepler mission are statistically consistent with being mostly flat," Dawson said.

NASA's Kepler spacecraft launched in 2009 to determine how commonly Earth-like planets occur in the Milky Way galaxy. The $600 million mission has spotted nearly 1,000 exoplanets, with more than 3,000 others awaiting confirmation by follow-up observations and analysis.

Kepler's original planet hunt came to an end in May 2013, when the second of the spacecraft's four orientation-maintaining reaction wheels failed, robbing the telescope of its superprecise pointing ability. Kepler has now embarked on a new mission called K2, during which it will scan the skies for a number of cosmic objects and phenomena.