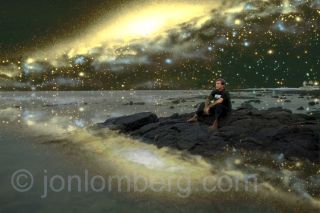 Artist Jon Lomberg created this portrait of himself in the universe.
(Image: © Jon Lomberg)

Jon Lomberg is one of the foremost artists inspired by astronomy. His 25-year partnership with Carl Sagan produced iconic work, including the art for the series "Cosmos," which earned Lomberg a Primetime Emmy Award. Lomberg was also the design director of NASA's Voyager Interstellar Record, animation designer for the opening graphics of the movie "Contact," muralist for "Portrait of the Milky Way" at the National Air and Space Museum in Washington, D.C., and creator of the Galaxy Garden in Hawai'i. Lomberg is currently project director for One Earth: New Horizons Message. He contributed this article to Space.com's Expert Voices: Op-Ed & Insights.

Some artists are born for a certain subject. For Degas, it was dancers; for Wyland, it was whales; and for me, it was the Milky Way. Our glorious galaxy has been the touchstone of my art since the beginning.

I have depicted the galaxy in sound and image and animation; in paint, pencil and pixels; on Plexiglas sheets and cel acetate; and as a living model made of flowers. I've traveled the world and observed the glowing band of stars, our view from the inside of the galaxy, from Death Valley and the South Pacific. I've seen it crossed by aurorae in northern Ontario. In the Andes in Chile, the lore of the Incas showed me animals formed out of the dark dust clouds silhouetted against the stars.

It's always seemed to me that the ladder of my identity climbed past my school and city, my country and planet, out to an address somewhere in the Milky Way. Learning that exact address has been my passion. With my friend and mentor Carl Sagan, I dived into the Milky Way from outside (in "Cosmos") and backing out from Earth until our spiral home becomes visible (in the opening to "Contact").

In a way, I've been an evangelist for a galactic perspective. Through these images that follow, I share that story.

Portrait of the Artist as a Young Galaxy

Since early childhood, I have been fascinated by galaxies. In 1975, I was building model galaxies for science museums, such as this one at the Ontario Science Center. The galaxy is painted on parallel sheets of Plexiglas and illuminated by UV lights. A similar one has its home in Sagan's house in Ithaca, New York. Sagan and I planned many of our projects by the light of this galaxy, and found it unfailingly inspirational.

The Backbone of Night

The !Kung people of the Kalahari Desert in Botswana describe the Milky Way as the "backbone of night." Sagan commissioned this image, which he later used as the title graphic for an episode of the television series "Cosmos." The image inspired my interest in combining biological and astronomical motifs in my art.

Portrait of the Milky Way

In 1991, the Smithsonian Institution's National Air and Space Museum commissioned me to paint this accurate view of our home galaxy, displayed for many years in its "Where Next, Columbus?" gallery. I worked with astronomers to accurately map 300 star clusters and nebulae in and above our Milky Way galaxy's spiral arms. Our solar system is located far from the galactic center, at a point near the center of the painting, where imaginary diagonals cross. The international astronomy community has accepted this painting as a "best guess" of how our galaxy looks. It appears in many science museums worldwide, and NASA still uses it on the official website of the Kepler Space Telescope to illustrate the portion of the galaxy the telescope has surveyed.

I designed the "Galaxy Garden" as the world's first accurate, large-scale, explorable model of the Milky Way galaxy, realized as a flower garden measuring 100 feet (30 meters) across. In the scale of the garden, 1,000 light-years = 1 foot. The mapping is as accurate as available through current science, based on the model of astronomer Leo Blitz, of the University of California, Berkeley. Flowering spiral arms grow out of a larger disc of dark matter, which, in reality, would extend far beyond the borders required in the real garden in Kona, Hawaii.

One Leaf in the Galaxy Garden

In a garden analogy for the Milky Way, all the stars you can see with the naked eye are on the same leaf as the sun — or neighboring leaves. The awe-inspiring countless stars on a dark night are merely our closest neighbors, sharing a small branch of the much larger Galaxy Garden. At this scale, the sun is smaller than a virus; the whole solar system out to the distant Oort Cloud of comets is a hundredth of an inch across. Seeing the scale of our night sky compared to the galaxy provides an "Aha!" moment to all visitors.

In this image, I depict glowing gas nebulae as flowers against a dark tracery of dust. Young stars grow in these nebulae and burst free, like seeds spreading through the galaxy. Eventually, the stars release much of their constituent gases back into space, to form a new generation of starflowers. Beautiful hibiscus flowers are used in the Galaxy Garden to accurately locate the well-known Orion, Lagoon, Trifid and Eta Carinae nebulae, among others.

The central regions of the Milky Way galaxy contain a long, oval "bar," a structure observed in many spiral galaxies. At the Galaxy Garden's center is a rock fountain, a greatly enlarged depiction of the Milky Way's supermassive black hole. The actual region of the black hole would be the same size as our solar system is in this model — on the molecular scale. But its importance in the structure of our galaxy warrants its dominant role in the Galaxy Garden.

The funnel-shaped structure is based on the conventional representation of the way the black hole distorts space-time. The event horizon surrounds the black hole like a cliff. Fall over it, and you never get out. A jet of material shoots out of the black hole. The image of the funnel and jet is reflected in the water, indicating that the jet emerges in two opposite directions from the black hole.

Citizen of the Galaxy

Who are we? Where did we come from? We are citizens of the galaxy. Beyond family, beyond country, beyond planet, beyond solar system — we are forever children of the Milky Way, star stuff waking up. Galactic civilization is right here; you don't have to travel anywhere to get to it. It's with you all the time if you only realize it.

Follow all of the Expert Voices issues and debates — and become part of the discussion — on Facebook, Twitterand Google +. The views expressed are those of the author and do not necessarily reflect the views of the publisher. This version of the article was originally published on LiveScience.com.