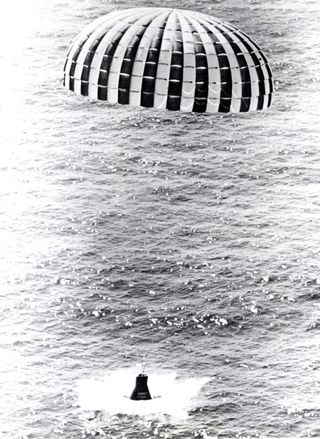 A Mercury spacecraft lands in the ocean after launched from Little Joe in a High-Q-Abort test in 1961.
(Image: © NASA)

In this historical photo from the U.S. space agency, "Little Joe" 5B launched a Mercury spacecraft in a high-Q-abort test. The ring-sail parachute lands the spacecraft off the shore of Wallops Island, Virginia.

The Little Joe rocket booster was developed as a cheaper, smaller, and more functional alternative to the Redstone rockets. Little Joe could be produced at one-fifth the cost of Redstone rockets and still have enough power to carry a capsule payload.