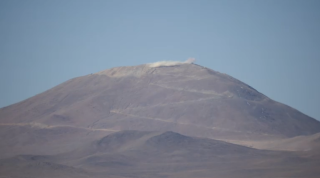 Officials with the European Southern Observatory made way for the future European-Extremely Large Telescope on June 19, 2014 with a modest explosive blast atop a mountain in Chile.
(Image: © ESO)

A modest mountaintop blast in Chile today (June 19) kicked off construction of the largest optical/infrared telescope ever built on Earth.

Officials with the European Southern Observatory (ESO) detonated explosives atop Cerro Armazones, a 9,842-foot (3,000 meters) peak in the Atacama Desert in Chile. The astronomy organization — a collaboration of 15 different partner countries — needs to shape the mountain before the European-Extremely Large Telescope (E-ELT) can be constructed.

The E-ELT is expected to start collecting data sometime in the next decade, and it will be outfitted with a 128-foot (39 m) mirror. ESO has referred to the telescope as "the world's biggest eye on the sky." [See artist depictions of what the E-ELT will look like]

"One of the most exciting programs will be to study the atmospheres of Earth-like planets orbiting other stars, and to search for signs of biological activity," Tim de Zeeuw, ESO's director general, said during a ceremony before the blast. "Finding evidence of life elsewhere in the universe would be a transformational development in the history of our species. It is actually quite ironic that this could happen right here in the Atacama Desert, one of the most beautiful, but certainly very lifeless, locations on our own planet."

The huge telescope is designed not only to examine alien worlds, but when it goes online it should also gather data about dark energy and dark matter, as well as probe the universe for other mysteries.

"It will dwarf every other telescope, and it will allow tremendous astronomical discoveries not only in the deep universe, but also closer to home," de Zeeuw said. "For example, providing an unprecedented look into the properties of the supermassive black hole that lurks in the center of our Milky Way."