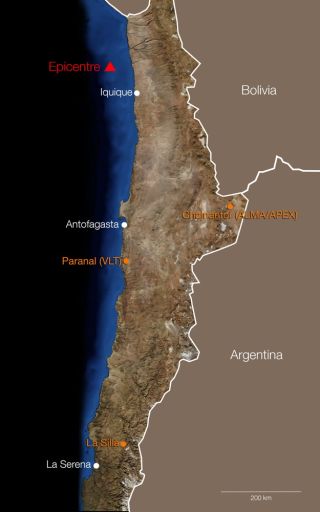 The epicenter for the 8.2 earthquake that rocked Chile on Tuesday was approximately 310 miles (500 km) from the Very Large Telescope and ALMA.
(Image: © ESO)

The massive earthquake that struck Chile on Tuesday (April 1) left three main European-built observatories in the region relatively untouched despite causing damage and a tsunami along the country's western coast.

The European Southern Observatory (ESO) operates three major observatories in Chile, each with multiple telescopes: the Paranal Observatory, which is home to Europe's Very Large Telescope; the La Silla Observatory, which hosts various telescopes, such as the 2.2-m Max-Planck telescope, 1.2-m Swiss Telescope and the 1.5-m Danish Telescope; and ALMA and APEX, or the the Atacama Large Millimeter/submillimeter Array and the Atacama Pathfinder Experiment. (Also in the Chajnantor region is Caltech's Chajnantor Observatory.)

The epicenter was located approximately 310 miles (500 km) from both the ALMA/APEX and Paranal sites.

"The quake was felt at the ALMA camp as a prolonged swaying, which lasted for about 2 minutes," the ALMA Observatory said in a statement.

However, none of the ESO facilities reported any damage.

No casualties were reported among ESO staff, but many with friends and family in the harder-hit regions of Iquique and Arica, another city close to the earthquake's episode, were affected. The ESO reports that all staff on site has been able to contact their family.

"ESO expresses its deepest condolences to the families of the victims, and its sympathy and support for all those affected by the statement," the organization said in a separate press release.

A larger 8.8-magnitude earthquake that struck Chile in 2010 also left the observatories untouched.