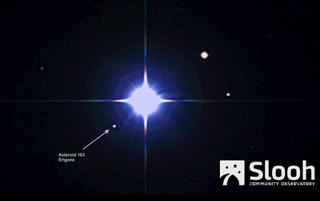 The huge asteroid 163 Erigone passed in front of Regulus, blotting out the bright star Regulus for a few seconds for viewers in North America. Here, the asteroid can be seen nearing the occultation as viewed by a Slooh online community telescope. Image uploaded March 20, 2014.
(Image: © Slooh Space Camera)

NEW YORK - A giant asteroid the size of Rhode Island eclipsed a bright star in the night sky in the wee hours of today (March 20), but the super-rare celestial event was spoiled by Mother Nature for many stargazers, experts say.

Skywatchers stayed up late hoping to see the huge asteroid 163 Erigone eclipse the star Regulus — the 22nd brightest star in the night sky. The fast moving, distant space rock flew in front of the star in the constellation Leo, momentarily blotting out Regulus for as much as 14 seconds in along a small visibility track across northeast North America. Most observers, however, didn't get the rare celestial treat they were hoping for tonight. They got rain and clouds instead.

"It's miserable," astronomer Bob Berman said during the online Slooh Space Camera webcast of the Regulus event. "It's absolutely miserable. The weather is as bad as it possibly could be. It's really a double shame because it's been crystal clear for days. Isn't that the way it goes?" [Rare Asteroid Eclipse of Star Regulus: A Photo Guide]

The 45-mile-wide (72 kilometers) asteroid's eclipse of Regulus (technically called an occultation) could only be seen from an approximately 100-mile-wide path north and west of New York City. An estimated 20 million people live in the visibility region. The event was one of the 11 most promising stargazing events of 2014, according to Space.com's skywatching columnist Joe Rao.

But because the path is so narrow, it's possible that the weather was not ideal anywhere that the occultation could be seen, Slooh officials said. That did not stop some observers from trying.

Officials at the the Intrepid Sea, Air & Space Museum, a retired aircraft carrier that now serves as a Manhattan museum, initially New Yorkers out to try and see the asteroid occultation from the U.S.S. Intrepid, but were forced to cancel the event when it became clear the rain would ruin night sky observations. A group of professional astronomers with the advocacy group Astronomers on Tap planned to visit several NYC bars to tout the asteroid occultation.

"Folks have been scattered up and down the path from the New York City area … on into Canada," Ted Blank, of the International Occultation Timing Association, said during the webcast. "Everybody was hoping against hope that this front would speed up and clear out in time, but at the moment, I haven't seen any sign that anybody got any positive occultation observations."

Editor's note:  If you did get a nice picture of the occultation, or if you managed to see the rare cosmic event, let Space.com know in the comments on this story, or send an email to Space.com managing editor Tariq Malik with images, comments and observing location to spacephotos@space.com.

Scientists do already know that 163 Erigone is about 100 million miles from Earth in an orbit around the sun between Mars and Jupiter in the main belt of asteroids. The huge space rock is not considered a near-Earth asteroid, and doesn't pose a danger to the planet.

Astronomers were hoping to learn more about 163 Erigone during the occultation.

"By having people along the occultation path and timing exactly when that happens, we find out not just the shape of the asteroid, but whether it might have a little companion," Berman said. "We already know of cases where an asteroid is a twosome, where they travel through space with a little companion … So, it was very important astronomy that was being attempted."