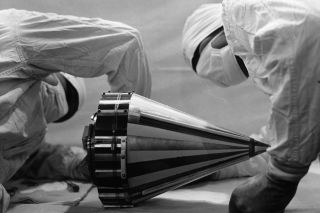 NASA technicians wear cleanroom attire to inspect the Pioneer III probe prior to its trip to Cape Canaveral, FL, in 1958.
(Image: © NASA.)

In this historical photo from the U.S. space agency, looking more like surgeons, these technicians wearing "cleanroom" attire inspect the Pioneer III probe before shipping it to Cape Canaveral, Florida.

Pioneer III was launched on December 6, 1958 aboard a Juno II rocket at the Atlantic Missile Range, Cape Canaveral, Florida. The mission objectives were to measure the radiation intensity of the Van Allen radiation belt, test long range communication systems, the launch vehicle and other subsystems.