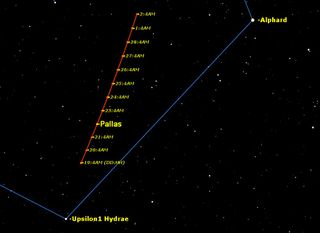 The second largest asteroid Pallas will be in opposition to the sun in Hydra on February 22, and well placed for observation all week.
(Image: © Starry Night software)

Although asteroids figure prominently in doomsday predictions, science-fiction stories and video games, most stargazers have never actually seen one with their own eyes.

This week you will get an excellent opportunity to observe one of the largest asteroids, Pallas, as it passes close to Earth. (Don't worry — there is no chance the enormous space rock will hit our planet.)

Over the next couple of weeks, Pallas will be moving rapidly through the constellation Hydra, just south of Leo. Because its orbit is tilted 35 degrees to the ecliptic plane of the solar system, Pallas will appear to move almost north to south. [See photos of potentially dangerous asteroids]

Next, look for Upsilon1 Hydrae, a 4th-magnitude star located 8.5 degrees below and to the left of Alphard. Then use the chart to locate Pallas relative to these two stars on the night you are observing. Pallas will look just like an 8th-magnitude star. Plot its position relative to the stars around it, and you will see that it moves noticeably after only a few hours. This is the only way to be sure which "star" is really the asteroid.

Pallas will be between 6th- and 7th-magnitude, just too faint to see with the naked eye, but easily visible in binoculars. Pallas will be slightly brighter than most of the stars between Alphard and Upsilon1; therefore, it should be relatively easy to spot.

The name "asteroid" was given to bodies like Pallas because, even in the most powerful telescopes, they look like stars. This is because of their relatively small size.

Most asteroids in the solar system are located in orbits falling between the orbits of Mars and Jupiter, the so-called asteroid belt. This name leads to the misconception of a band of small rocks.

The reality is far different. Actual asteroids — though numbering in the millions — are separated by large distances. Standing on any one asteroid, you would need binoculars to see the nearest asteroids. Navigating through the asteroid belt is very easy, since it is essentially empty space. The chance of hitting an asteroid is virtually zero.

Ceres is large enough to have been pulled into a spherical shape by gravity. Smaller asteroids like Pallas are more irregular in shape.

Editor's note: If you have an amazing picture of Pallas or any other night sky view that you'd like to share for a possible story or image gallery, send photos, comments and your name and location to managing editor Tariq Malik at spacephotos@space.com.