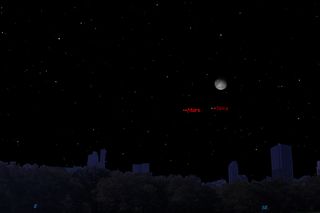 This sky map shows the location of Mars, the moon and star Spica in the late-night sky at 11:59 p.m. local time on Wednesday, Feb. 19, 2014 as seen from mid-northern latitudes.
(Image: © Starry Night Software)

If your weather is clear late Wednesday (Feb. 19), take a look at the sky toward the east-southeast horizon to spot a "celestrial triangle" formed by the moon, a bright star and an even brighter planet: Mars.

On Wednesday, the moon will be exactly midway between its full and last quarter phases, appearing as a waning gibbous moon about 75-percent illuminated. Shining brightly with a fiery hue well above the moon will be the planet Mars, with the bluish star Spica completing the triangle far to the moon's upper right. By around 1 a.m. Thursday (your local time), this cosmic triangle will have climbed about one-third of the way up from the southeast horizon to the point overhead.

The planet Mars is in the midst of a "triple conjunction" with Spica, which is typically the 16th brightest star in the sky. On Feb. 3, Mars passed about 4.5 degrees north of the star, but by March 1 Mars will appear to slow down and come to halt as it begins to retrograde or move back toward the west against the background stars. As a result, it will pass north of Spica again on March 25.  [Amazing Night Sky Photos for February 2014]

Mars' retrograde motion will end on May 25, at which time the planet will resume its normal eastward motion and will pass Spica for a third and final time on July 14.

Stargazers will have to stay up rather late in the evening — soon after 10 p.m. your local time —– to see Mars rise, but the wait is worth it! Mars nearly doubles in brightness in February, and the planet is currently rivaling the similarly hued Arcturus, the fourth brightest star in the sky, in brilliance.

In night sky measurements, your clenched fist held at arm's length covers roughly 10 degrees of the sky. The star Arcturus can be found roughly 30 degrees (or "three fists") to the upper left of Mars. If you are making comparisons, note that with its somewhat ruddier tint and steady light the planet appears far more imposing.

Currently, Mars is 81.9 million miles (131.8 million kilometers) from Earth and drawing closer to our planet by about 454,000 miles (730,000 km) each day. The opposition of Mars — when the planet will shine at its brightest in 2014 and be visible all through the night from sunrise to sunset — is now less than two months away. And we'll be treated to some of the best views of the Red Planet in about six years.

Currently the disk of Mars measures 10.6 arc seconds across and will appear to get a little larger with each passing night. Those with telescopesof at least 6-inch aperture and using a magnification of at least 170-power should on clear, steady nights around the time Mars is highest in the sky (around 4 a.m. local time), start getting memorable glimpses of surface markings as well as the shrinking north polar ice cap.

Editor's note: If you snap a great photo of Mars, the moon or any other night sky view and you'd like to share it for a possible story or image gallery, please contact managing editor Tariq Malik at spacephotos@space.com.