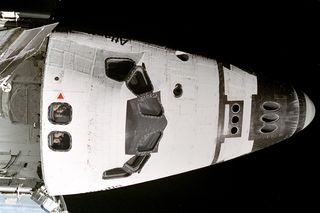 The five-member crew of the Space Shuttle Atlantis during the November, 1995 STS-74 peer at Mir from the flight deck.
(Image: © NASA.)

In this historical photo from the U.S. space agency, the five STS-74 astronauts aboard the space shuttle Atlantis look out overhead windows on the aft flight deck toward their counterparts aboard the Mir Russian space station, with which they had just rendezvoused.