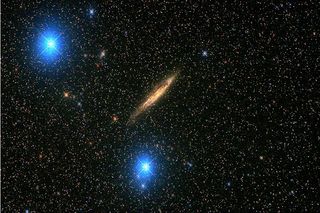 R.D. Boozer is an astrophysics researcher, host of the Astro Maven blog and author of the book "The Plundering of NASA: an Exposé" (lulu.com, 2013). He contributed this article to SPACE.com's Expert Voices: Op-Ed & Insights.

NASA has pushed back its first crewed flights to the International Space Station (ISS) from 2015 to 2017 — after Congress allocated less money to the Commercial Crew program than President Barack Obama's administration says the space agency needs. That's two extra years the United States must pay Russia to taxi American astronauts to the ISS, two years when that same money could instead support American jobs back home.

In the Commercial Crew Development program (or Commercial Crew), NASA is helping companies develop launch vehicles and spacecraft to transport astronauts to the ISS with partial financing while the companies pay the remainder of the development costs themselves. Indeed, it's amazing that the Commercial Crew has made any significant progress, since it received just over one-third of its total requested funds for the period covering the last three years.

Worse, NASA's inspector general says insufficient funding of Commercial Crew may cause an even longer delay of the first crewed flight — to 2020. That puts the first expedition near the end of the ISS's life expectancy, and adds five extra years of sending money to Russia.

Though the Space Launch System (SLS) wouldn't fly astronauts until 2021 under the most optimistic estimates, certain powerful legislators ensure that this program suffers little compared to Commercial Crew. Indeed, the size of the SLS program's budget in recent years has largely come at the expense of Commercial Crew. Meanwhile, the former executive secretary of the National Space Council under the G. H. W. Bush administration has dubbed the SLS technology and contracting methods "too expensive, too slow and too old."

NASA is supposed to work on daring, cutting-edge technology that it is not profitable for industry to develop. It made sense for NASA to create its own rockets in the 1960s and 1970s, when producing boosters was a new and highly experimental field. But now, industry has taken the booster tech that NASA developed back then and adapted it; today, the private sector can develop such vehicles more economically and efficiently than NASA can.

Meanwhile, page 55 of a report issued by the Government Accountability Office states that workers developing NASA's Orion spacecraft (costing another 1 billion dollars a year) want to lighten the vessel by 5,000 pounds (2,300 kilograms) without compromising either capability or safety.

NASA could be working on real advancements instead of the obsolete monstrosity that is SLS/Orion — advancements that could lead to exciting deep-space missions. The money would come from the budget savings made available by using commercial market vehicles.

For example, NASA has an excellent design for an advanced spaceship called Nautilus-X that would stay in space and never land on Earth. By implementing "artificial gravity" via a spinning module, Nautilus-X would prevent severe bone loss in astronauts during long periods of weightlessness. It would also protect crew from severe radiation hazards during interplanetary flight, such as coronal mass ejections. Spacecraft like Sierra Nevada's Dreamchaser, Boeing's CST-100 and SpaceX's Dragonrider could haul people between the Earth and Nautilus-X to embark or disembark on deep-space journeys.

NASA should also pursue in-space filling stations to top-off spacecraft propellant tanks. Instead, the money-hungry SLS/Orion now takes political precedence over everything else.

The solution would involve allowing NASA's engineers and technicians to do something worthy of their talents, something that involves 21st-century breakthrough technology rather than just another launcher that industry can now do better. "Reinventing the wheel" with SLS is an insult to the fine people at NASA when you think of the new technology and human exploration missions they could be working on with the money saved by using commercial launchers.

NASA is being set up for failure via SLS/Orion, as it was with Ares 1 crew launch vehicle and Constellation spaceflight program. Many will blame NASA for SLS's inevitable failure, no matter which presidential administration orders the program cancelled. The talented space-agency professionals don't deserve such mistreatment, when the real blame for the loss lies with Congress.

Nonetheless, the political purveyors of pork prefer a launch system that wastes billions of taxpayers' money and gives the Chinese extra time to narrow the considerable space-technology lead that the U.S. currently enjoys. Even now, there is already maneuvering in Congress to prevent the future cancellation of this shameless boondoggle.

The author's most recent Op-Ed was "It's Time to Send Americans into the Inner Solar System." The views expressed are those of the author and do not necessarily reflect the views of the publisher. This version of the article was originally published on SPACE.com.