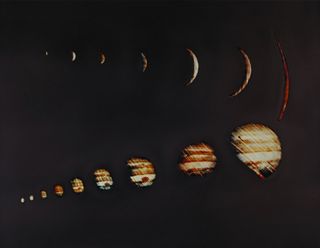 On Dec. 4, 1973, NASA's Pioneer 10 spacecraft sent back images of Jupiter increasing in size as it approached the gas giant.
(Image: © NASA)

On Dec. 4, 1973, exactly 40 years ago this week, NASA's Pioneer 10 probe beamed the first up-close images of Jupiter back home.

After traveling away from Earth for more than a year and navigating a risky route through the asteroid belt, Pioneer 10 became the first spacecraft to reach Jupiter, sailing within 81,000 miles (130,000 kilometers) of the planet's cloud tops.

The Jupiter images in this photo montage, released by NASA in honor of Pioneer 10's flyby anniversary, show Jupiter growing in size into to a warped crescent shape before shrinking as spacecraft flew away. [Target: Jupiter - 9 Missions to the King of Planets]

Pioneer 10, which launched on March 2, 1972, also captured images of Jupiter's moons, such as Europa and Ganymede, and it measured the planet's magnetosphere, radiation belts, atmosphere and interior.

The mission paved the way for more ambitious explorations of the solar system, and several more spacecraft visited Jupiter in the decades that followed, including Voyager 1 and 2, the Galileo spacecraft, the Saturn-bound Cassini-Huygens and New Horizons probe en route to Pluto. Those probes sent back even more amazing color portraits of the gas giant, its swirling storms and its polar auroras. In 2011, NASA launched its $1.1 billion Juno mission to study Jupiter. It should arrive at the planet in 2016.

Pioneer 10 sent it last signal back to Earth in January 2003 from billions of miles away. It is expected to eventually join Voyager 1 as one of the few manmade objects to leave our solar system. In case Pioneer 10 ever ends up in the hands of extraterrestrials, the spacecraft and its sister vehicle Pioneer 11 both carry gold plaques to describe where they came from, with images of a man and woman as well as a diagram of our solar system. The plaques, which were co-designed by SETI founder Frank Drake and television host and astronomer Carl Sagan, inspired the golden records aboard Voyager 1 and 2.