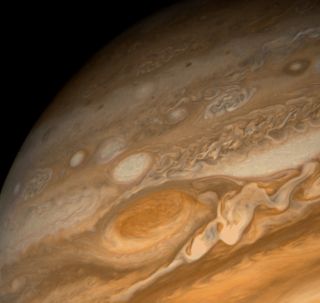 The mystery of why Jupiter's Great Red Spot did not vanish centuries ago may now be solved, and the findings could help reveal more clues about the vortices in Earth's oceans and the nurseries of stars and planets, researchers say.

"Based on current theories, the Great Red Spot should have disappeared after several decades," researcher Pedram Hassanzadeh, a geophysical fluid dynamicist at Harvard University,said in a statement. "Instead, it has been there for hundreds of years." [Photos: Most Powerful Storms in the Solar System]

Vortices like the Great Red Spot can dissipate because of many factors. For instance, waves and turbulence in and around the storm sap its winds of energy. It also loses energy by radiating heat. Moreover, the Great Red Spot rests between two powerful jet streams in Jupiter's atmosphere that flow in opposite directions and may slow down its spinning.

Some researchers suggest that large vortices such as the Great Red Spot gain energy and survive by absorbing smaller vortices. However, "this does not happen often enough to explain the Red Spot's longevity," researcher Philip Marcus, a fluid dynamicist and planetary scientist at the University of California, Berkeley,said in a statement.

The Great Red Spot is not the only mysterious vortex. In fact, vortices in general, including ones in Earth's oceans and atmosphere, often live much longer than current theories can explain.

Models of vortices generally focus on swirling horizontal winds, where most of the energy resides. Although vortices also have vertical flows, these have much less energy. Therefore, "in the past, most researchers either ignored the vertical flow because they thought it was not important, or they used simpler equations because it was so difficult to model," Hassanzadeh said.

The researchers now find that vertical flows hold the key to the Great Red Spot's longevity: When the storm loses energy, vertical flows move hot and cold gases in and out of the storm, restoring part of the vortex's energy. Their model also predicts radial flows that suck winds from the high-speed jet streams around the Great Red Spot toward the storm's center, helping it last longer.

Together, vortices — whether on Jupiter or in Earth's oceans — may decay up to 100 times slower than researchers previously thought.

"Some vortices in the oceans have been observed to last for several years and are believed to play an important role in the oceanic ecosystem and ocean-atmosphere interaction," Marcustold SPACE.com. In addition, "vortices with physics very similar to the Great Red Spot are believed to contribute to star and planet formation processes, which would require them to last for several million years. Both oceanic and astrophysical vortices are subjected to dissipating processes, and the mechanism described here for the longevity of the Great Red Spot presents a very plausible explanation for their longevity as well."

The scientists caution that their model does not entirely explain the Great Red Spot's long life span. They suggest that occasional mergers with smaller vortices may help prolong the giant storm's life as well, and have begun modifying their computer model to test this idea.

In addition, their "current model does not account for compressibility of the flow or sphericity of the planet," Hassanzadeh told SPACE.com. "Although we believe that these effects do not change the conclusions of our work, we are planning to modify our model in the next step and include these effects."

The scientists will detail their findings Nov. 25 at the annual meeting of the American Physical Society's Division of Fluid Dynamics in Pittsburgh.