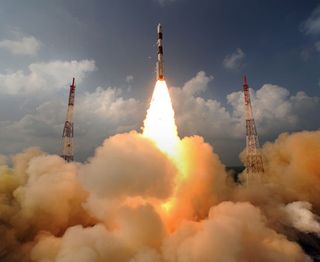 A week into its mission, India's Mars probe overcame a bout of engine trouble Monday with an unplanned maneuver to boost its orbit after a rocket firing failed to do its job Sunday.

India launched the probe on a roundabout trajectory to Mars because the 1.5-ton spacecraft was too heavy for its rocket to place it on a direct course to the red planet.

The tradeoff means the spacecraft is still in Earth orbit, and it must use its own propulsion system to gain speed and break free of Earth's gravity. [India's First Mars Mission (Photos)]

The spacecraft accomplished three rocket firings last week, but the fourth burn Sunday was aborted before it could raise the probe's altitude to the maneuver's target of 100,000 kilometers, or approximately 62,000 miles.

Officials said the spacecraft instead reached an orbit with an apogee, or high point, of 78,722 kilometers, or 48,915 miles.

Controllers devised a supplemental burn Monday to make up for the shortfall and boost the probe up to a 72,720-mile apogee, and the five-minute thruster firing was completed as expected, according to a post on the mission's official Facebook page.

The probe's liquid-fueled main engine prematurely stopped its burn Sunday when propellant abruptly stopped flowing to the thruster. The problem occurred when primary and redundant coils of the engine's solenoid flow control valve were "energized" together, the Indian Space Research Organization said in a statement.

"The thrust level augmentation logic, as expected, came in and the operation continued using the attitude control thrusters," ISRO said in a statement. "This sequence resulted in reduction of the incremental velocity."

The craft's main engine is designed to produce about 440 Newtons of force, equal to about 98 pounds of thrust. The attitude control thrusters, which help point the spacecraft and are used for smaller maneuvers, generate much less thrust.

Ground controllers were testing the engine's built-in redundancies, including the redundant coil, during Sunday's engine firing, and "while this parallel mode of operating the two coils is not possible for subsequent operations, they could be operated independently in sequence," ISRO said.

Engineers wanted to test the ability of the coils to operate simultaneously to avoid the possibility of a failure of one of the coils causing a problem during future critical burns, such as the lengthy make-or-break engine firing required to place the probe into orbit around Mars.

The first three orbit-raising burns were all conducted without incident, according to ISRO.

"During the first three orbit-raising operations, the prime and redundant chains of gyros, accelerometers, 22-Newton attitude control thrusters, attitude and orbit control electronics, as well as the associated logics for their fault detection isolation and reconfiguration have been exercised successfully," ISRO said. "The prime and redundant star sensors have been functioning satisfactorily. The primary coil of the solenoid flow control valve was used successfully for the first three orbit-raising operations."

The next burn is scheduled for Nov. 15, according to ISRO.

The probe carries instruments to return color images of the Martian surface, study the planet's composition and survey the atmosphere for methane, a potential indicator of life.