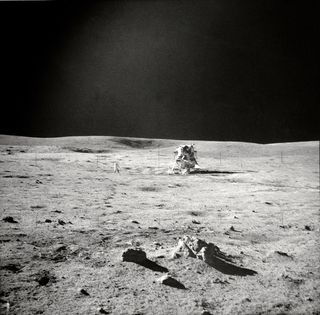 Mission commander Alan Shepard Jr. is shown during an EVA in a photo by Astronaut Edgar Mitchell on Feb. 6, 1971.
(Image: © NASA.)

In this historical photo from the U.S. space agency, Astronaut Edgar D. Mitchell, lunar module pilot, photographed this sweeping view showing fellow Moon-explorer astronaut Alan B. Shepard Jr., mission commander, and the Apollo 14 Lunar Module (LM). A small cluster of rocks and a few prints made by the lunar overshoes of Mitchell are in the foreground.

Mitchell was standing in the boulder field, located just north by northwest of the LM, when he took this picture during the second Apollo 14 extravehicular activity (EVA-2), on February 6, 1971. While astronaut Stuart A. Roosa, command module pilot, remained with the Command and Service Modules (CSM) in lunar orbit, Shepard and Mitchell descended in the LM to explore the Moon.