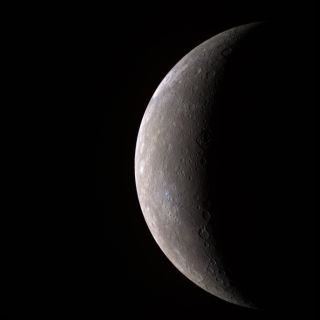 This visible-infrared image shows an incoming view of Mercury, about 80 minutes before MESSENGER's closest pass of the planet on Jan. 14, 2008, from a distance of about 27,000 kilometers (17,000 miles). The color image was generated by combining three separate images taken with different filters.
(Image: © NASA/JHUAPL/CIW)

LONDON — Mercury, the smallest planet in our solar system, may hold clues to understanding how the Earth's moon was born, a scientist studying the planet says.

Just like the moon, Mercury is a desolate, rocky and airless body, albeit a bit bigger than Earth's satellite, said Sean Solomon, the principal investigator for NASA's Messenger mission to Mercury. He presented the idea of using Mercury to glean insights into Earth's moon at the recent Origin of the Moon conference held here at the Royal Society.

There is currently no theory that can successfully tick all the boxes answering the question how the moon formed. The most popular theory is that it was produced after a planet-size body nick-named Theia smashed into the infant Earth some 4.5 billion years ago, with the moon coalescing from material blasted out from the catastrophic impact. [The Moon: 10 Surprising Lunar Facts]

But this Great Impact theory has shortcomings, and researchers are trying numerous angles to find fresh clues, including the studies on the origins of Mercury by Solomon and his colleagues.

In March this year, the $446 million Messenger spacecraft successfully finished mapping the small planet’s entire surface. The spacecraft launched in 2004 and arrived in orbit around Mercury in 2011. Scientists are now sifting through the heap of data beamed back by Messenger.

One of the most remarkable findings so far are the astonishing similarities between moon and Mercury, particularly with regards to their geological history.

"Mercury and the moon [seem to] have followed very similar tracks," said Solomon, who is also director of the Lamont-Doherty Earth Observatory of Columbia University in New York.

It is striking, given that Mercury is thought to have formed from the material that made up the early disk of gas and dust spinning around the sun, and not due to a giant impact like the moon, Solomon added. [Latest Photos of Mercury by NASA's Messenger Spacecraft]

Just like the moon, a part of Mercury's surface is relatively smooth terrain. On Mercury, these plains cover 27 per cent of the surface, on the moon around 16 per cent. Scientists think that the plains of both bodies formed billions of years ago from volcanic eruptions that covered the surface with low-viscosity lava, effectively flooding low-lying regions and partially filling or burying old craters.

Although Mercury's ancient cratered uplands and younger volcanic plains are differently composed than their lunar equivalent, they are very similar in their topography and also about the same age.

It means that "both bodies also had explosive volcanic eruptions that produced what are known as pyroclastic deposits, the pyroclastic glasses," Solomon said. Volcanic glasses are molten rocks that cooled and solidified on a space body’s surface.

The moon's volcanic glasses, however, are primarily basaltic in chemistry and darker than their surroundings. Those on Mercury are brighter and redder than the rest of the surface.

Despite the differences, it is significant that "in volcanic eruptions there was a sufficient content of volatiles in the magma to drive the fire fountain eruptions that produced the glasses," Solomon said, explaining that "volatiles" are gases that can escape extremely easily.

The similarities between the moon and Mercury don't stop there.

Both bodies have polar ice deposits formed in regions of permanent shade and preserved for eons because of the resonance between the planet's spin rate and orbital period. And finally, Solomon said, Mercury and the moon have strong hemispherical differences, meaning that each has two sides that are markedly different from each other.

While basaltic plains prevail on the side of the moon that permanently faces the Earth, the moon's far side is almost completely covered in craters.

"The moon also has a remarkable concentration of heat-producing elements on the near side, and the presumption is that this side was hotter for a longer period of time. It differs perhaps even chemically from the far side," Solomon said.

Mercury also has important hemispherical differences: Most of its volcanic plains are in the northern hemisphere.

So what can all this tell scientists about the origin of the moon? After all, the two bodies have significant differences: unlike the moon, Mercury has a global magnetic field; its density is higher; there is an abundance of volatile elements such as sulfur; its surface contains much less iron, particularly in its crustal silicates — which indicates that the processes deep inside both bodies have been very different.

But Solomon says we should look at the many commonalities of their geological evolution.

One stumbling block of the giant impact theory of moon formation has been the incredible isotopic similarities between the Earth and the moon.

Indeed, if a large object that hit the Earth was different from it, why then are the planet and its satellite so isotopically alike?

One thing that could really help solve this riddle, is a sample from Mercury — from a meteorite or a future mission, Solomon said.

If Mercury happens to be isotopically similar to Earth, it would mean that most of the material in the early disk spinning around the Sun shared isotopic characteristics — and that the objects that collided to grow the final stages of the Earth and created the moon started out with a similar composition.

However, such a scenario would leave an odd one out: Mars.

Mars is isotopically different from Earth. If Theia had had Mars' isotopic composition, the oxygen isotopes on Earth and moon would be quite distinct.

But if Mercury turns out to be similar to Earth, it could imply that there was some process that homogenized the isotopes of all planets between the sun and Mars — and this is "the big question right now," said Jay Melosh, Distinguished Professor of Earth, Atmospheric and Planetary Sciences at Purdue University.

"If there was [such a process] then Theia might have had a nearly identical isotopic composition to Earth and all our puzzles about why the Moon and Earth are so similar isotopically then evaporate," he added. "The process obviously did not affect Mars, but it did affect the planets closer to the sun."