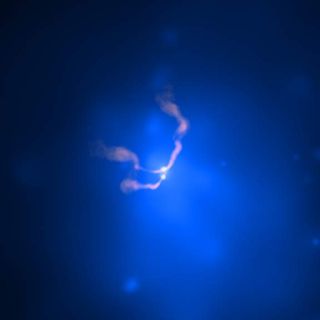 Scientists are watching two supermassive black holes spiral towards each other near the center of a galaxy cluster named Abell 400. Shown in this X-ray/radio composite image are the multi-million degree radio jets emanating from the black holes.
(Image: © X-ray: NASA/CXC/AIfA/D.Hudson & T.Reiprich et al.; Radio: NRAO/VLA/NRL)

The types of black hole mergers predicted by Einstein's general relativity have been accurately simulated in a computer model for the first time.

The new three-dimensional model provides a direct test of Einstein's theory and could guide the hunt for gravitational waves, one of the most elusive and sought-after forms of energy in the universe.

"In the past, we've always shown animations or artists' conceptions of gravitational waves, but now we have Einstein's conception," said Joan Centralla, head of NASA Goddard's Gravitational Astrophysics Laboratory and a member of the team that created the model.

The model was announced in a media teleconference today.

Blinded by the waves

Black holes are regions of space where matter is packed so tightly that the resulting gravity ensnares matter and even light.

Einstein's general relativity predicts that when black holes merge, they will emit gravitational waves that distort the fabric of space-time like ripples spreading across a pond.

"These mergers are by far the most powerful events occurring in the universe, with each one generating more energy than all of the stars combined," Centralla said. "If our brains could detect gravitational waves like light waves, we'd be blinded by black hole mergers."

Previous simulations of black hole mergers were plagued by crashes because they used translations of Einstein's general relativity equations too complex for even the most sophisticated computers.

Einstein's theory of general relativity uses tensor calculus, a type of mathematics that can't be programmed directly into computer code. The equations must be translated, but as in the translation of a book from one language to another, the process leaves some room for interpretation.

Just as some translations of Tolstoy's "Anna Karenina" read better than others, certain renditions of Einstein's equations are easier for computers to understand.

The new model, developed by scientists at NASA's Goddard Space Flight Center in Maryland, is one such translation. The simulation, shown here in a video animation, follows two non-spinning black holes of equal mass spiraling around each other before colliding and then merging.

Another reason the researchers think their model is true to Einstein's equations, aside from not triggering crashes, is that it shows black holes orbiting stably and producing identical waveforms, called "ringdown," during the infall, collision and aftermath-a first in these types of simulations.

"We're throwing down the gauntlet for Einstein's theory of general relativity," said Paul Hertz, head scientists of NASA's Science Mission Directorate, who was not involved in the modeling.