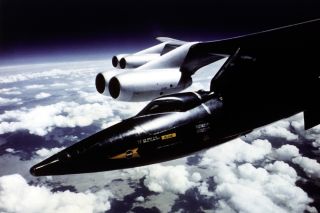 In this historical photo from the U.S. space agency, how the X-15 rocket powered aircraft was taken aloft under the wing of a B-52 is illustrated. Because of the large fuel consumption, the X-15 was air launched from a B-52 aircraft at 45,000 ft and a speed of about 500 mph.

Information gained from the highly successful X-15 program contributed to the development of the Mercury, Gemini, and Apollo manned spaceflight programs, and also the Space Shuttle program. The X-15s made a total of 199 flights, and were manufactured by North American Aviation. X-15-1, serial number 56-6670, is now located at the National Air and Space Museum, Washington DC. North American X-15A-2, serial number 56-6671, is at the United States Air Force Museum, Wright-Patterson AFB, Ohio. The X-15-3, serial number 56-6672, crashed on November 15, 1967, resulting in the death of Major Michael J. Adams.