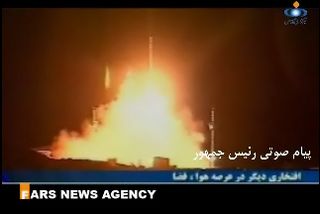 Iran intends to use the successful Feb. 2 launch of its Omid store-and-forward communications satellite to spur development of larger spacecraft and higher-capacity versions of the Iranian-built Safir-2 rocket that placed it into orbit, an official with the Iranian Space Agency (ISA) said.

In a Feb. 12 address in Vienna to the U.N. Committee on the Peaceful Uses of Outer Space (COPUOS), Reaza Taghipour Anvari of ISA said Omid'sdevelopment is viewed by the Iranian government as a way to encourage interest in high technology.

"[A]ll the work from design to manufacturing to test and operation of the satellite and its launch vehicle has been done by Iranian experts and engineers," Anvari said, according to a copy of the presentation provided by COPUOS.

U.S. Space Surveillance Network data confirmed that the two-stage Safir-2 rocket placed an object into an orbit with an apogee of 237 miles (382 km) and a perigee of 150 miles (242 km), inclined at 55 degrees relative to the equator.

Anvari said these were the approximate orbital coordinates expected for the 60-pound (27-kg) Omid, which measures 40 cubic centimeters and operates in the UHF communications frequency band.

Much of the attention of the United States, Europe, Japan and other nations has been on what conclusions may be drawn about Iran's missile-development work from the successful satellite launch. ISA, in a statement after the launch, said Iranian President Mahmoud Ahmadinejad dismissed Western accusations that Iran's space program has military ambitions.

Anvari did not touch on that subject in his prepared presentation, but focused instead on technology development that has accompanied the Omidprogram. He said these include the development of three tracking, telemetry and command stations, four ranging stations and a flight control center. Domestic development of the software for the ground network has been a key element of the Omid and Safir-2 investment.

Iran launched its first satellite in 2005 aboard a Russian rocket, and began developing Omid in 2006, a year after the Iranian government announced it would spend $500 million on a domestic space program between 2005 and 2010.