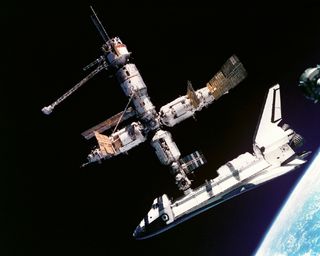 In this historical photo from the U.S. space agency, the Space Shuttle Atlantis, still connected to Russia's Mir Space Station, was photographed by the Mir-19 crew on July 4, 1995. Cosmonauts Anatoliy Y. Solovyev and Nikolai M. Budarin, Mir-19 Commander and Flight Engineer, respectively, temporarily undocked the Soyuz spacecraft from the cluster of Mir elements to perform a brief fly-around.

They took pictures while the STS-71 crew, with Mir-18's three crew members aboard, undocked Atlantis for the completion of this leg of the joint activities. Solovyev and Budarin had been taxied to the Mir Space Station by the STS-71 ascent trip of Atlantis.