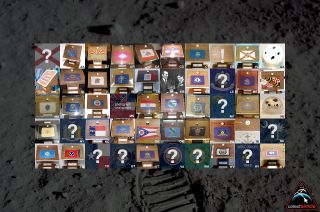 Despite a search that has lasted more than a decade, the current whereabouts of the Apollo 11 moon rocks gifted to Alabama, Louisiana, Nevada, New York, South Carolina, Texas, Utah, Virginia, Washington and Wisconsin are still unknown.

The eleventh missing display, presented to Delaware, was stolen in 1976.

Forty-four years ago Wednesday (July 24), astronauts Neil Armstrong, Buzz Aldrin and Mike Collins returned to Earth after completing the first mission to land on the moon. The souvenirs of the moonwalkers' success were 48.5 pounds (22 kg) of lunar material, including samples of the moon's fine-grain soil and 50 rocks.

As the first-ever geologic return from another world, every pebble was scientifically precious, even the scraps found at the bottom of the astronauts' collection bags. So it was a particularly prestigious honor when four months after the Apollo 11 mission, then-President Richard Nixon decided to award tiny specimens — 0.05 grams (0.002 ounces) each in the form of four specks — to each of the 50 U.S. states, as well as the nation's territories and 135 foreign nations.

Each of the displays' four small stones were embedded in a single acrylic button and mounted to a desktop wooden podium. Accompanying the moon rocks was a small state or country flag, which had been flown to the moon by the Apollo 11 astronauts.

At the base of the display were mounted two plaques, one reading in part: "This flag of your nation was carried to the moon and back by Apollo 11 and this fragment of the moon's surface was brought to Earth by the crew of that first manned lunar landing." [Guide: Where are the Apollo 11 Lunar Sample Displays Today?]

The displays that were exported outside the United States have been difficult to find four decades later. Geographical and language barriers have complicated a search already hindered by the passage of time. Nearly 100 of the gifts are currently unaccounted for; either they are truly missing or have yet to be found by the mostly-American graduate students, historians and space enthusiasts conducting the search.

As the displays are no longer U.S. property, NASA has no responsibility or need to track them. The same is true for the states' samples, but as they are still within the borders of the nation, it was assumed that the common laws that govern public gifts would make finding them rather easy.

Some of the moon rock displays are exactly where you would expect to find them: museums, state capitols and archives. Among the 39 states' samples that have been catalogued, about one-fourth of them are presently held in storage for safekeeping or are on hold for the state's next planned temporary or permanent displays. The others are on exhibit for the public to see.

Some of those now on display however, had to be found first.

Hawaii's was rediscovered after it was stored in a cabinet in the executive chambers of the state capitol building. Minnesota's moon rocks had been put away with military artifacts before being found and transferred to the state's historical society last year. Nebraska's display was lost in the governor's mansion until building renovations resulted in the moon rocks resurfacing.

And then there was the case of Alaska's Apollo 11 lunar sample display, which disappeared in 1973 after a fire tore though the museum where they were on exhibit. In 2010, they reemerged in the possession of a reality TV star, who tried to sue the state to gain legal title to the moon rocks. He ultimately surrendered them.

Of the moon rocks that are still missing, someone swiped some right off Delaware's display 37 years ago. The state's Division of Historical and Cultural Affairs still has the blank wooden podium but hasn't any new leads on the lunar larceny.

But at least Delaware knows where their four small specks of the moon once were; the efforts to turn up the other 10 states' missing samples have so far been unsuccessful.

The Apollo 11 sample displays were not the only pieces of the moon gifted to the states. A similar presentation was made after the final lunar landing.

The Apollo 17 goodwill moon rocks were gifted attached to a wooden plaque rather than a podium and each included one stone rather than four specks.