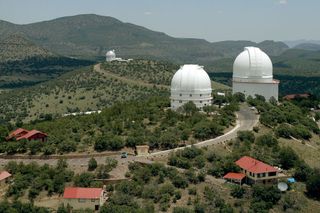 McDonald Observatory is a Texas-based astronomical site that has made significant contributions in research and education for more than 80 years.

Administered by the University of Texas at Austin, the McDonald Observatory has several telescopes perched at an altitude of 6791 feet (2070 meters) above sea level on Mount Locke and Mount Fowlkes, part of the Davis Mountains in western Texas, about 450 miles (724 kilometers) west of Austin. McDonald "enjoys the darkest night skies of any professional observatory in the continental United States," according to a news release issued for the observatory's 80th anniversary.

McDonald is home to the Hobby-Eberly Telescope, one of the world's largest optical telescopes, with a 36-foot-wide (11 meter) mirror.

A visitor center offers daytime tours of the grounds and big telescopes, daytime solar viewing, a twilight program in an outdoor amphitheater, and nighttime star parties with telescope viewing.

The observatory is also known for its daily StarDate program, which runs on more than 300 radio stations across the country.

The gift of an observatory

The regents of the University of Texas were surprised when they opened the will of William Johnson McDonald, a banker from Paris, Texas, who died in 1926. He had left the bulk of his fortune to the university for the purpose of building an astronomical observatory. After court proceedings were done, about $850,000 (the equivalent of $11 million today) was available, according to the Texas State Historical Association.

"McDonald is said to have thought that an observatory would improve weather forecasting and therefore help farmers to plan their work," the association said.

But there were two major challenges to overcome before McDonald's wish could become reality. First, the money was enough to build an observatory but not enough to run it, so the university would need to acquire more funds. Second, at that time, the University of Texas had no astronomers on its faculty, so it needed to recruit a team of space experts.

McDonald's first major telescope — later named the Otto Struve Telescope after the observatory's first director — was finished in 1939 and is still in use today. Its main mirror is 82 inches (2.08 meters) across. One of the main purposes of the Struve Telescope was to analyze the exact colors of light coming from stars and other celestial bodies, to determine their chemical composition, temperature, and other properties. To do this, the telescope was designed to send light through a series of mirrors into a spectrograph -- an instrument that separates light into its component colors -- in another room. This required the telescope to be mounted on a strange-looking arrangement of axes and counterweights, designed and built by the Warner & Swasey company. "With its heavy steel mounting and black, half-open framework, the Struve is not just a scientific instrument, but it is a work of art," the Observatory's website says.

The Struve Telescope helped astronomers gather the first evidence of an atmosphere on Saturn's moon Titan. Gerard Kuiper, assisted by Struve himself, found the clues  while examining our solar system's largest moons in 1944. Kuiper published his spectroscopic study in the Astrophysical Journal.

In 1956, a reflecting telescope with a 36-inch (0.9 m) mirror was added to the McDonald site at the request of the University of Chicago. Housed in a dome made from locally quarried rock and leftover metal from the Struve Telescope dome, this instrument was designed primarily to measure changes in the brightness of stars. It is now obsolete for professional research, but is regularly used for special public-viewing nights.

The Harlan J. Smith Telescope, with a main mirror 107 inches (2.7 m) across, was built by NASA to examine other planets in preparation for spacecraft missions. It was the world's third-largest telescope when it saw first light in 1968.

From 1969 to 1985, the Smith telescope was also used to aim laser light at special reflecting mirrors left on the moon by Apollo astronauts. Measuring the time required for the reflected light to return to Earth enables astronomers to measure the moon’s distance to an accuracy of 1.2 inches (3 centimeters). These measurements, in turn, contribute to our understanding of Earth’s rotation rate, the moon’s composition, long-term changes in the moon’s orbit, and the behavior of gravity itself, including small effects predicted by Albert Einstein’s General Theory of Relativity.

When the Smith telescope was being built, a circular hole was cut in the center of its main quartz mirror to allow light to pass to instruments at the back of the telescope. The cutout quartz disk was made into a new mirror 30 inches (0.8 m) across for another telescope. This instrument, built nearby in 1970 and known simply as the 0.8 meter telescope, has the advantage of an unusually wide field of view.

Today, the giant at McDonald is the Hobby-Eberly Telescope (HET), on neighboring Mount Fowlkes, almost a mile (1.3 km) from the cluster of original domes on Mount Locke. The HET is a joint project of the University of Texas at Austin, Pennsylvania State University, and two German universities: Ludwig-Maximilians-Universität München, and Georg-August-Universität Göttingen.

Dedicated in 1997, the HET makes a striking technological contrast with the classic Struve instrument. HET's main mirror is not one piece of glass or quartz, but an array of 91 individually controlled hexagonal segments making a honeycomb-like reflecting area that's 36 feet (11 m) wide. A mushroom-shaped tower next to the main dome contains lasers that are aimed at the mirror segments to test and adjust their alignment.

Another remarkable feature of the HET is that the telescope can rotate to point toward any compass direction, but it cannot tilt up or down to point at different heights in the sky. Instead, the main mirror is supported at a fixed angle pointing 55 degrees above the horizon. A precisely controlled tracking support moves light-gathering instruments to various locations above the main mirror, which has the effect of aiming at slightly different parts of the sky. This unique, simplified design allowed the HET to be built for a fraction of the cost of a conventional telescope of its size, while still allowing access to 70% of the sky visible from its location.

The HET was designed primarily for spectroscopy, which is a key method in current research areas such as measuring motions of space objects, determining distances to galaxies and discovering the history of the universe since the Big Bang.

In 2017, the HET was rededicated after a $40 million upgrade. The tracking system was replaced with a new unit that uses more of the main mirror and has a wider field of view. And, new sensing instruments were created.

One of the new instruments is the Habitable Zone Planet Finder (HPF), built in conjunction with the National Institute of Standards and Technology. The HPF is optimized to study infrared light from nearby, cool red dwarf stars, according to an announcement from the observatory. These stars have long lifetimes and could provide steady energy for planets orbiting close to them. The HPF allows precise measurements of a star's radial velocity, measured by the subtle change in the color of the star's spectra as it is tugged by an orbiting planet, which is critical information in the discovery and confirmation of new planets.

Advancing another frontier is the Hobby-Eberly Telescope Dark Energy Experiment (HETDEX).Billed as the first major experiment searching for the mysterious force pushing the universe's expansion, the HETDEX "will tell us what makes up almost three-quarters of all the matter and energy in the universe. It will tell us if the laws of gravity are correct, and reveal new details about the Big Bang in which the universe was born," the HETDEX project website says.

A key piece of technology for the dark-energy search is the Visible Integral-Field Replicable Unit Spectrographs, or VIRUS, a set of 156 spectrographs mounted alongside the telescope and receiving light via 35,000 optical fibers coming from the telescope. With this package of identical instruments sharing the telescope, the HET can observe several hundred galaxies at once, measuring how their light is affected by their own motions and the expansion of the universe.

The HETDEX will spend about three years observing a minimum of 1 million galaxies to produce a large map showing the universe's expansion rate during different time periods. Any changes in how quickly the universe grows could yield differences in dark energy.

In 2019, the McDonald Observatory received a grant from the Apache Corp., an oil and gas exploration and production company, to promote awareness of the value of dark skies as a natural resource and as an aid to astronomical research. The gift will fund education programs, outreach events, and a new exhibit at the observatory’s visitors center. According to the observatory’s announcement, Apache has served as a model for other businesses in west Texas by adjusting and shielding the lights at its drilling sites and related facilities.

This article was updated on Nov. 15, 2019, by Space.com Contributor Steve Fentress.