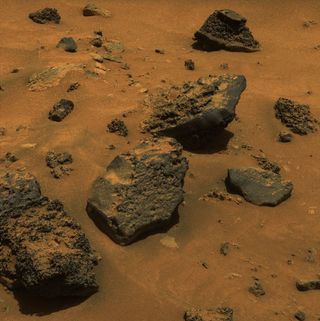 Spirit has surveyed rocks at Gusev exploration site that are solidified from lava as shown in this approximate true color image. Image
(Image: © NASA/JPL-Caltech/Cornell)

NASA's revered Mars rovers, Spirit and Opportunity, are both on a roll toward new scientific objectives, but two years into their mission, the twin robots are each showing their age.

Spirit at Gusev crater is closing in on "Home Plate"--a circular feature that scientists want to study before the Martian winter sets in. Scientists are hopeful of finding layered rock outcrops in that area that could yield additional data about the geology of the "Columbia Hills".

Spirit has been on the move after departing Husband Hill, part of the seven-rise Columbia Hills chain that the robot successfully scaled after months of mountain climbing. It has been steadily driving through the basin south of Husband Hill, traversing mainly sand and dune deposits.

Meanwhile, ground controllers here on Earth are steering Opportunity onward to Victoria crater--a large feature that promises to be a geological time capsule.

Opportunity recently supported coordinated observations with the European Space Agency's Mars Express orbiting spacecraft and also took images of a transit across the Sun by Phobos--one of the red planet's two moons.

At present, both robots remain relatively healthy and active, despite working eight times as long as the three-month missions originally planned for them--but each shows signs of wear and tear.

Opportunity rolled its way into a third year of Mars operations on January 24.  Spirit did so on January 3.

Late last year, an Opportunity Instrument Arm Anomaly Team at the Jet Propulsion Laboratory (JPL) in Pasadena, California investigated the safety of different positions of the robot's instrument-tipped arm. The original position for the arm while driving was to tuck it underneath the vehicle hooked on a small pin.

In a touch of robot arthritis, a shoulder-joint motor is stalling, apparently due to a broken wire in the motor windings. Engineers have blueprinted a strategy for keeping the arm un-tucked even when not in use and as the robot moves to various targets. That way the arm could still position instruments on features even if the motor with the broken wire becomes unusable.

The robot's shoulder motor still works when given extra current and the arm is still useable without that motor.

In addition, Opportunity's steering motor for the front right wheel stopped working months ago. Opportunity can still maneuver with its three other steerable wheels.

On Spirit, it's got teeth problems. The teeth on the rover's rock abrasion tool are too worn to grind the surface off any more rocks. However, a wire-bristle brush can still remove loose coatings. This robot's rock abrasion tool has served well. It was designed to uncover three rocks, but successfully exposed the interiors of 15 rocks for closer inspection.

More recently, Spirit has experienced brake hardware troubles, seemingly similar to issues noticed back in October 2004. Rover engineering teams are troubleshooting the matter, electing to disable left front and right rear steering motors during some of the rover's driving spurts.

In a new status report on the rovers, Steve Squyres of Cornell University explained that both robots are on the move. He is the lead scientist for the Mars Exploration Rover project.

Squyres reported via a Cornell-based rover web site that ground controllers have found a way to drive Opportunity short distances with its robot arm deployed. A microscope imager mounted on the arm has worked beautifully, he said, capturing new observations of select surface targets.

Once work is wrapped up in the area, "it will be time to hit the road in a big way," Squyres reported.

This huge depression--some half-mile (800 meters) in diameter--is tagged as a potential "time tunnel" by John Callas, JPL deputy project manager and science manager for the rovers. Reaching it will allow access to ancient martian material that otherwise would be buried deep beneath the surface and inaccessible, he has noted.

The drive south from Opportunity's current locale "is going to be interesting," Squyres said in his web site update.

"Victoria crater beckons, and we really want to lay down some serious mileage. At the same time, we have to keep the vehicle safe, and we have to make sure we don't blow by anything too interesting. A balance is necessary, but our hoped-for drive strategy is a pretty aggressive one. A lot of it, of course, will depend on whether or not Mars cooperates," Squyres explained.

On the other side of the planet at Gusev crater, rover Spirit has inspected "Arad", a white soil target.

In checking it out, Arad turned out to be extraordinarily high in ferric sulfate salts. It now holds the record for the "saltiest place ever discovered on Mars," Squyres reported.

"Since Arad, we've been pretty much sprinting for Home Plate. One thing that we've been noticing lately is that there seem to be a lot of very porous basalt blocks in this neighborhood. We've been resisting the temptation to stop at one, but we got lucky...and had one pop up just by chance in front of us," he said.

Using Spirit's robot arm, microscope imagery of "GongGong" was done. GongGong represents a frothy, gas-rich lava that solidified with lots of voids in it and eroded by wind for a very long time.

"You may ask where a name like GongGong came from," Squyres said. "We have several Chinese members of our team, and in honor of Chinese New Year, we have been assigning names from Chinese mythology and history to the rocks at Gusev. GongGong, I'm told, was the king of water from the north, who knocked down Mount BuZhou with his head. You can learn all kinds of things by doing a mission to Mars."

Spirit is now poised near the north end of Mitcheltree Ridge, the most significant topographic feature between the rover and Home Plate, Squyres said.

"Mitcheltree Ridge is named after the late Bob Mitcheltree, one of the real intellectual leaders of the Entry, Descent and Landing team that got our rovers safely down onto the surface of Mars," Squyres explained in his web site report.

"We should get our first close-up look at Home Plate soon, and we're all anxious to see what we'll see," Squyres said.

"I am so psyched because we are on the verge of arriving at Home Plate very, very soon... we may arrive by week's end if all goes well," Rice told SPACE.com.

Rice said Home Plate is roughly 260 feet (80 meters) at its widest and it forms a dais or raised platform. It has a relatively brighter halo on its outer edges and darker center.

What is Home Plate? Rice said his own view is that the ridges and buttes surrounding it are the remains of an ancient, highly-eroded impact crater.

"What comprises the Home Plate feature is unknown but it could be the remains of a regional mantle of material that blanketed or draped the Inner Basin and Columbia Hills. It has since then been mostly stripped away by wind but patches remain," Rice said. "This may have been an airfall deposit from volcanism," he speculated.

Rice noted that he's seen numerous small, highly-eroded crater rims and raised crater floor platforms like Home Plate in southeast Gusev. Or it could be a local deposit laid down in the bowl of this impact crater. On the other hand it could be indurated material formed by the impact event, he postulated.

"Who knows...but soon we will have a handle on this feature," Rice concluded.