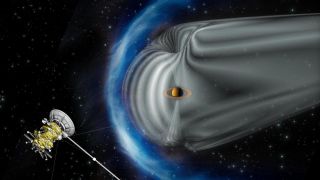 This artist's impression shows NASA's Cassini spacecraft exploring the magnetic environment of Saturn. Saturn's magnetosphere is depicted in grey, while the complex bow shock region — the shock wave in the solar wind that surrounds the magnetosphere — is shown in blue. The image is not to scale.
(Image: © ESA)

The particles flowed from the sun during a strong blast of solar wind, then plowed into Saturn's magnetic field shortly thereafter. This encounter, which Cassini observed in February 2007, created a shockwave that accelerated the particles to super-high energies, scientists said.

Similar shockwaves commonly form in the aftermath of massive star explosions called supernovas, ramping up nearby particles to nearly the speed of light. Researchers think supernova shockwaves are the primary source of cosmic rays, high-energy particles that pervade our Milky Way galaxy and slam into Earth's atmosphere continuously.

It can be tough to study distant supernovas and their shockwaves, so Cassini's observations provide a welcome proxy, scientists said.

"Cassini has essentially given us the capability of studying the nature of a supernova shock in situ in our own solar system, bridging the gap to distant high-energy astrophysical phenomena that are usually only studied remotely," Adam Masters, of the Institute of Space and Astronautical Science, Sagamihara, Japan, said in a statement.

Masters is lead author of a study reporting the Cassini findings, which was published this week in the journal Nature Physics.

The Saturn shockwave may be the most powerful ever detected at the ringed planet and suggests that certain kinds of shocks can be surprisingly efficient particle accelerators, researchers said.

The $3.2 billion Cassini mission is a joint effort of NASA, the European Space Agency and the Italian Space Agency. Cassini launched in 1997 and arrived at the Saturn system in 2004, delivering a lander called Huygens to the planet's huge moon Titan in January 2005.

Cassini will continue studying the ringed planet and its many moons for several years to come; Cassini's mission has been extended through at least 2017.