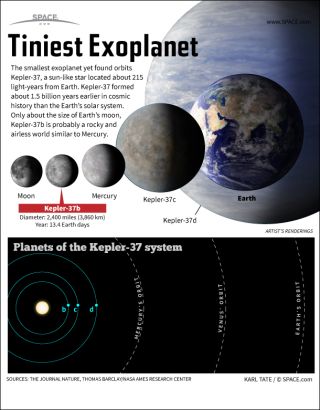 The smallest exoplanet yet found orbits Kepler-37, a sun-like star located about 215 light-years from Earth.

Only about the size of Earth's moon, Kepler-37b is probably a rocky and airless world similar to Mercury.

Due to its size and high level of surface radiation, tiny Kepler-37b is thought to be a rocky exoplanet like Mercury, with no atmosphere or water.

The star Kepler-37 formed 6 billion years ago, about 1.5 billion years earlier in cosmic history than the Earth’s sun. Kepler-37 is about 97 percent as bright as the sun, and has 0.8 of the mass of the sun.

Only since 2012 have astronomers had the capability to detect planets smaller than Earth in other solar systems.