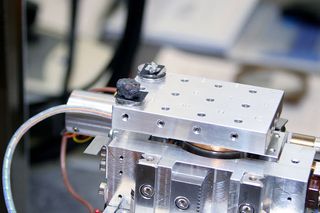 A group of Russian scientists has reported finding small meteorites from the fireball that exploded over the Chelyabinsk region in a blinding light, sending a shockwave that caused millions of dollars in damage in the city.

While most of the meteor likely vaporized in the atmosphere, the rock was big enough that plenty of pieces likely fell to Earth, experts have said.

Now, scientists with the Urals Federal University announced that they had found "53 small, stony, black objects" around a lake near Chelyabinsk, Reuters reported. The lake, Lake Chebarkul, is the same one where a 20-foot-wide hole in the thick ice cover was thought to have been caused by a chunk of the meteor. [Meteor Streaks Over Russia, Explodes (Photos)]

Divers have been exploring the frigid waters, but have found no signs of meteorite fragments. Russian officials have said they think the hole was caused by something else and have shifted their focus to cleaning up from the shockwave damage, AFP has reported.

The meteor was unrelated to an asteroid, 2012 DA14, that made an extremely close flyby of Earth on Friday, passing within 17,200 miles (27,000 kilometers), but never posing a threat to the planet.

Ural university scientists said that they had confirmed that the fragments they found were in fact meteorites (the term once a meteor has landed on the Earth’s surface). Tests they performed showed that they were chondrite, or stony, meteorites, the most common type of meteorite in the solar system, Reuters quoted one of the scientists as saying.

The meteorite fragments were a mere 0.2 to 0.4 inches (0.5 to 1 centimeters) across, Reuters reported.

Scientists aren't the only ones looking for meteorites from the Russian fireball. Collectors are also rushing to the region in hopes of finding chunks of the space rock.

"This is the biggest event in our lifetime," rock dealer Michael Farmer of Tucson, Ariz., told OurAmazingPlanet, a sister site to SPACE.com, on Friday. "It's very exciting scientifically and for collecting, and luckily, it looks like there will be plenty of it."

Farmer said he's planning to leave for Russia as soon as possible. "I wouldn't miss this for the world," he said.

Editor's note: If you snapped a photo of the meteor explosion over Russia that you'd like to share for our image gallery, send photos, comments and your name and location to managing editor Tariq Malik at spacephotos@space.com.