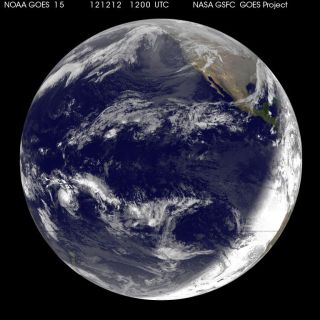 Collisions among molecules in early Earth’s atmosphere may have prevented our planet from freezing over eons ago, when the sun was much dimmer than it is today, keeping the world warm enough for life to emerge, scientists say.

When the sun was young, models suggest it was only 70 percent as bright as it is today. However, during the first 2 billion years of Earth's history, geological evidence suggests the Earth was still warm enough that glaciers did not cover its entire surface, allowing early life to emerge.

Scientists, including Carl Sagan, have suggested a number of possible solutions to this so-called "faint young sun paradox." Perhaps a complex brew of global warming gases helped keep the planet warm. Perhaps the sun was brighter than previously thought. Or perhaps the early Earth absorbed more sunlight than previously suggested.

However, many of these effects "have later been found to have important weaknesses," said study lead author Robin Wordsworth, a planetary scientist at the University of Chicago.

In their new study, Wordsworth and his colleague Raymond Pierrehumbert suggest that collisions between hydrogen and nitrogen molecules in the early Earth's atmosphere could have helped them trap incoming solar radiation and warm the planet. [Earth’s Atmosphere from Top to Bottom (Infographic)]

Molecules can absorb infrared light — the kind most often given off as heat — by wobbling in response to the light. Greenhouse gases such as carbon dioxide can absorb infrared photons and heat up the planet, but nitrogen and hydrogen gas generally do not.

"However, if the atmosphere is dense enough, hydrogen and nitrogen molecules will occasionally stick when they collide with each other, forming new hydrogen-nitrogen 'dimer' molecules," Wordsworth said. "These dimers have many different ways to wobble, which allows them to absorb infrared photons very effectively, and hence keep a planet's surface warm."

Past research had suggested that the early Earth was not rich in hydrogen.

"Hydrogen is such a rare gas in Earth's atmosphere today that at first glance, it seems crazy that it could ever have played a role in warming the climate," Wordsworth said.

However, recent calculations show the early Earth's atmosphere could actually have been up to about 30 percent hydrogen gas. Wordsworth and Pierrehumbert found that if Earth's early atmosphere was 10 percent hydrogen gas, it could have conceivably increased surface temperatures by as much as 18 to 27 degrees Fahrenheit (10 to 15 degrees Celsius).

Hydrogen-nitrogen warming is particularly interesting because it has major implications for the development of the biosphere, the world's global community of life, Wordsworth said. Previously, researchers generally assumed that methane-producing, hydrogen-eating microbes must have been abundant across the early Earth, because they thought atmospheric methane was necessary to warm the planet.

"This idea has problems because under early Earth conditions, methane is actually a pretty ineffective greenhouse gas," Wordsworth said. "Our work shows that the Earth could have remained warm even if the early biosphere didn't pour out large amounts of methane."

In fact, instead of warming the climate by generating methane as previously believed, these microbes may have actually cooled the climate by consuming hydrogen.

"Untangling the coupling between climate and biology on the early Earth in light of our results will be an exciting topic for future research," Wordsworth said.

This warming effect "may be very important to our understanding of climates on other planets," Wordsworth added. "In particular, it could lead to an expanded definition of the habitable zone for larger planets — the so-called 'super-Earths' — that are far from their host stars."

The habitable zone of a star is defined as the area in which a planet's surface is warm enough to sustain liquid water. Since life is found virtually everywhere there is liquid water on Earth, this warming effect could therefore influence the search for signs of life, or biosignatures, on alien worlds, Wordsworth said. Super-Earths are expected to have atmospheres that are comparably rich in hydrogen and nitrogen, he added.

"We hope our results will encourage researchers to develop an expanded definition of the habitable zone for planets around other stars, and to think harder about how biosignatures might be derived from planets with hydrogen-rich atmospheres," Wordsworth said.

"There's been lots of previous work on the faint young sun paradox, and we're sure our study won't be the last word on the matter," Wordsworth added. "It's of course quite possible that the early Earth was kept warm by a combination of effects."

Wordsworth and Pierrehumbert detailed their findings in the Jan. 4 issue of the journal Science.