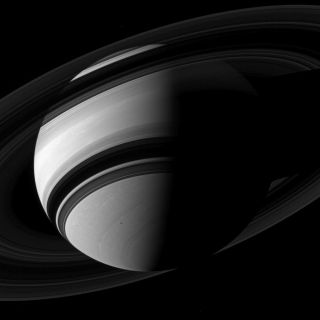 NASA has unveiled amazing new views of the planet Saturn showcasing the ringed wonder's moons, rings and turbulent atmosphere as seen by the Cassini spacecraft.

The shadow of Saturn's moon Mimas appears in the photo as a small, oblique dark spot slightly to the left and above the planet's south pole. Mimas is perhaps best known for a huge crater that dominates one of its hemispheres, leading some "Star Wars" fans to compare its look to the "Death Star."

Cassini also captured Janus, another of the more than 60 known moons of Saturn, in the top left section of the image. The small satellite is difficult to spot, but appears as a tiny white dot just over the planet's north pole. While NASA released the photo of Saturn, Mimas and Janus this week, Cassini actually snapped the image in August. Since then, mission scientists processed and polished the image to highlight its features. [Amazing Photos of Saturn's Rings]

Both of the new Saturn photos were taken with Cassini's wide-angle camera, but they represent two different ways NASA handles space images. The first photo of Saturn, Janus and Mimas was refined to bring out the most interesting aspects of the photos. For example, Janus was barely visible in the original, raw image, so image specialists opted to brighten the small moon in the final, refined image.

The second image is part of a larger database of raw images that NASA releases online soon after they are sent to Earth by Cassini. Like the first photo, this somewhat foggy depiction of Saturn's surface will eventually be treated to bring out its most stunning aspects.

The Cassini spacecraft has logged more than 3.8 billion miles (6.1 billion km) since its launch with the Huygens lander in 1997. Cassini arrived at Saturn in 2004 and dropped European-built Huygens onto the surface of Saturn's moon Titan. The Cassini- Huygens mission is a joint project of NASA, the Italian Space Agency and the European Space Agency.

During its time in space, Cassini has taken more than 300,000 images of the Saturn and its moons. The spacecraft is currently in an extended phase of its mission that runs through 2017.