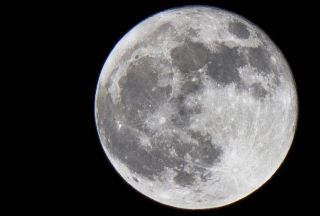 The final full moon of the year rises tonight to cap a year of amazing lunar sky shows. While the bright moon will easily outshine other celestial objects, there is more than meets the eye to Earth's nearest neighbor.

The December full moon is also called the "long-night's moon" since it is the closest full moon to the northern winter solstice (when the nights are longest). And indeed tonight's full moon will be visible for the longest amount of time.

Contrary to popular belief, the full moon not the best time to observe the moon with binoculars or a telescope.

Normally, even with just small optical power we can see a wealth of detail on its surface. But during the full moon phase, the moon appears flat and one-dimensional, as well as dazzlingly bright to the eye.

It is only later in the weekend and into next week that the moon's best features will stand out. As the moon wanes to its gibbous phase, and then to last quarter, those lunar features close to the terminator —the variable line between the sunlit and darkened portions of the moon — will appear to stand out in sharp, clear relief. [Amazing Moon Photos of 2012]

The moon will arrive at last quarter phase on Friday, Jan. 4 at 11:58 p.m. EST, when its disk will be exactly 50 percent illuminated.

How bright, the full moon?

How does the moon's brightness compare at that moment with when it's full? Most people may believe the moon is half as bright, but in reality astronomers say that the last quarter moon is only 1/11th as bright as full. This is because the moon is not a smooth sphere, but has a myriad of craters, mountains and valleys which cast long, distinct shadows across the lunar landscape.

Interestingly, a first quarter moon is actually slightly brighter than a last quarter moon, because at first quarter the illuminated half of the moon displays less of the dark surface features known as the "maria" (pronounced măr-rēa) popularly referred to as lunar "seas."

And believe or not, it isn’t until just 2.4 days before or after full that the moon actually becomes half as bright as full!

Here are some interesting lunar calendar facts that the famed Belgian astronomical calculator Jean Meeus has compiled concerning the phases of the moon:

All are cyclical, the most noteworthy being the so-called Metonic Cycle that was independently discovered by the Greek astronomer Meton (born about 460 B.C.). This is a 19-year cycle, after which time the phases of the moon are repeated on the same days of the year, or approximately so.

Take, for instance, Friday’s full moon. Nineteen years from now, in 2031, there’ll be another full moon on Dec.28.

Another moon cycle fact: After 2 years, the preceding lunar phase occurs on or very nearly the same calendar date. So in 2014, it will be the first quarter moon that occurs on Dec. 28.

After 8 years, the same lunar phases repeat, but occurring one or two days later in the year. Ancient Greek astronomers called this 8-year cycle the "octaeteris." Indeed, in 2020, a full moon occurs on Dec. 29.

Finally, in our Gregorian Calendar, 372 years provides an excellent long period cycle for the recurrence of a particular phase on a given date. Therefore, we know with absolute certainty that the same full moon that shines down on us on Dec. 28 of 2012 will also be shining on Dec. 28 in the year 2384.

So mark your lunar calendars and enjoy tonight's lunar display!

If you snap an amazing photo of the year's final full moon on Friday and would like to share it with SPACE.com for a potential story or gallery, submit photos and comments, including your name and location to managing editor Tariq Malik at: spacephotos@space.com.

Joe Rao serves as an instructor and guest lecturer at New York's Hayden Planetarium. He writes about astronomy for The New YorkTimes and other publications, and he is also an on-camera meteorologist for News 12 Westchester, New York. Follow SPACE.com on Twitter @Spacedotcom. We're also on Facebook & Google+.