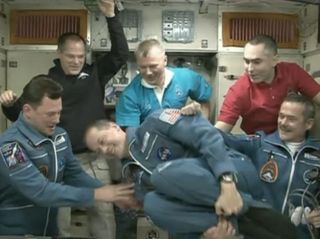 NASA astronaut Tom Marshburn does a flip in zero-g after arriving at the International Space Station Dec. 21. He, Russian cosmonaut Roman Romanenko, and Canadian astronaut Chris Hadfield had just docked aboard a Russian Soyuz spacecraft to join the existing Expedition 34 crewmembers, above.
(Image: © NASA TV)

The three newest residents of the International Space Station arrived at the high-flying laboratory Friday morning (Dec. 21) aboard a Russian Soyuz spacecraft, just in time to celebrate an orbital Christmas.

After docking, the astronauts performed leak checks on the seal between their Soyuz TMA-07M capsule and the space station's docking port on the Rassvet module before opening the hatches between the two vehicles at 11:37 a.m. EST (1637 GMT). Shortly thereafter, the new arrivals floated inside the station that is to become their home for the next five months. [Expedition 34 Launch in Pictures]

"All of Canada tuned in to watch that absolutely picture-perfect launch," Paul Engel, director of communications for the Canadian Space Agency, told the astronauts from Mission Control in Moscow after the three new crewmembers arrived. "Absolutely extraordinary. Good luck with the mission."

The spaceflyers each got to speak to members of their families gathered at Mission Control.

"Your face looks a bit puffed up. Have you been smilling a lot?" Hadfield's son Evan asked his father, whom he watched via a live video stream from the space station.

"Yeah, we've been smiling a lot," Hadfield replied. "It was just a heck of a ride for the three of us. It's like being on a crazy dragster."

Then Marshburn's daughter asked him to demonstrate a somersault in microgravity, and the astronaut happily obliged.

Three crewmembers are already living onboard the space station awaiting the new arrivals: commander Kevin Ford of NASA, and cosmonauts Oleg Novitskiy and Evgeny Tarelkin, both flight engineers for the station's Expedition 34 mission. Now that the new trio has joined them, the Expedition 34 team is complete, bringing the orbiting laboratory back up to its usual six-person crew complement.

Romanenko, who has flown to the space station once before, said that a six-person team is key for the kind of work they want to do in the lab.

"I think we need to continue as we've been doing, six people per increment," Romanenko, a veteran of one previous trip to space, said in a preflight interview with NASA. "I think this will again maximize the number of experiments that we do on station. Also, this will facilitate the process of adapting to space. It will help us develop skills that we'll be able to use when flying people to other planets."

While working and living in orbit, the spaceflyers will be responsible for monitoring the 110 experiments onboard, as well as keeping their bodies in shape, and performing maintenance to keep the station running smoothly.

In March 2013, Ford, Novitskiy and Tarelkin will head back to Earth, leaving Marshburn, Romanenko and Hadfield alone on the space station to begin the Expedition 35 mission. At this point, Hadfield will take over for Ford as mission commander, making him the first Canadian astronaut to hold that position on the orbiting complex.

This flight marks Hadfield's third trip to space, and second visit to the International Space Station.

Before joining the astronaut corps in 2004, Marshburn worked as a flight surgeon for NASA. He flew to the space station once before, in 2009, on the STS-127 space shuttle mission.

"I've experienced 11 days docked at the space station, 16 days in space on my last flight, so getting back to life in zero gravity, that is never boring, everything from putting on your clothes to brushing your teeth to working to transfer of hardware, all of its fun in zero-g," Marshburn told NASA before the launch. "I can’t wait to do that again."