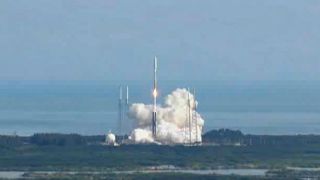 A classified military space plane blasted off into orbit Tuesday (Dec. 11) on the third mission of the U.S. Air Force's X-37B program.

The Air Force has been secretive about the details of the space plane's mission and its classified payload, which sits in a payload bay about the size of a pickup truck bed. Experts have suggested the vehicle could be used for materials science, space surveillance, imaging and reconnaissance. The mission is being managed by the Air Force Rapid Capabilities Office.

The X-37B is 29 feet (8.8 meters) long and 15 feet (4.5 m) wide, and looks like a miniature space shuttle. It's built by Boeing Government Space Systems. According to an Air Force factsheet, its purpose is "to demonstrate a reliable, reusable, unmanned space test platform for the United States Air Force." [Photos: U.S. Military's X-37B Space Plane]

This is the third flight of an X-37B spacecraft; the program's last mission landed June 16 after spending 469 days in orbit.

The X-37B vehicles make their autopilot landings on a specially prepared runway at Vandenberg Air Force Base in California.

Today's launch was delayed for several months past its original target to allow time for an investigation into the cause of a rocket failure that occurred on Oct. 4. On that day, a Delta 4 booster lifted off to carry a Global Positioning System 2F-3 satellite into orbit. Although the satellite reached its destination safely, the rocket's RL-10B-2 upper stage engine did not perform as expected.

Because the Delta 4 is built by the same company that makes the Atlas 5 — United Launch Alliance (ULA) — mission managers had to take that anomaly into account before launching the X-37B on the Atlas.

The accident investigation board found that a fuel leak in the interior of the rocket engine's thrust chamber occurred during the first engine start sequence. While ULA is still looking into all the details of that failure, today's launch was cleared after all potential implications for the Atlas 5 were addressed.