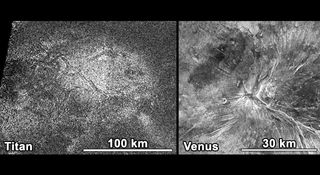 NASA's Cassini spacecraft obtained this image of a feature shaped like a hot cross bun in the northern region of Titan (left) that bears a striking resemblance to a similar feature on Venus (right).
(Image: © NASA/JPL-Caltech/ASI)

NASA's Cassini probe captured the new radar images of Titan of the 40-mile-long (70 kilometer-long) feature during a May 22 flyby. Researchers believe baking-hot plumes of magma might have lifted and fractured Titan's surface, creating the cross-shaped fissures, much like steam causes bread in the oven to rise and crack.

Rosaly Lopes, a Cassini scientist based at NASA's Jet Propulsion Laboratory, Pasadena, Calif., said astronomers have never before seen this type of feature on Titan.

"The 'bun' may be the result of what is known on Earth as a laccolith, an intrusion formed by magma pushing up from below," Lopes explained in an Oct. 16 statement. "The Henry Mountains of Utah are well-known examples of this geologic phenomenon."

A similar feature was spotted on Venus in a dome-shaped region about 20 miles (30 kilometers) across at the planet's Kunapipi Mons volcano, the researchers said. The findings were presented Tuesday (Oct. 16) at the American Astronomical Society's Division of Planetary Sciences conference in Reno, Nev.

Other images from the May 22 flyby supplied scientists with new evidence about the stability of the hydrocarbon lakes in Titan's northern hemisphere.

A group of researchers led by Ellen Stofan, based at Proxemy Research, Rectortown, Va., compared new pictures of the lakes with Cassini images taken of the same region about six years earlier (one Titan season). They found that the shorelines stayed about the same.

Liquid bodies on other parts of Titan are more transient, the researchers said, noting that parts of the moon's equator darkened after a rainstorm in 2010. The team also presented their research Tuesday in Reno.

The Cassini spacecraft launched in 1997 and arrived in orbit around Saturn in 2004. The mission was supposed to last four years, but it's still going strong at more than double its projected lifetime. The probe regularly passes by Titan, beaming new images of Saturn's massive moon back to Earth.