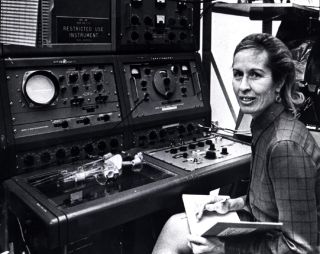 In this historical photo from the U.S. space agency, Ellen Weaver, an associate professor of biology from California State University, is shown in February 1973 developing instrumentation to be used in satellites for ocean monitoring.

In the early 1970s, NASA researchers and ocean explorer Jacques Cousteau formed a team to study productivity of the sea. The team devised a sensor system to monitor ocean temperatures and chlorophyll levels by aircraft. This sensor was used in the satellite communication and weather equipment provided by NASA to assist in the accuracy of satellite observation.