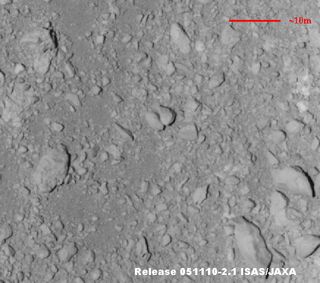 Getting down and dirty is the plan for Japan's Hayabusa asteroid probe. Imagery taken by the spacecraft shows the terrain of asteroid Itokawa in preparation for sampling of the space rock.
(Image: © JAXA)

Japan's Hayabusa asteroid sampling spacecraft made a pass at an asteroid today, a history-making first attempt to gather specimens of its target space rock, Itokawa.

Whether the spacecraft was successful in making contact with the asteroid, however, remains unclear.

According to Japan's space agency, JAXA, the spacecraft did successfully release a target marker, roughly 130 feet (40 meters) from the asteroid.

"Thus we are almost certain that the target marker reached the surface of the Itokawa," noted a web site of JAXA and its space research arm, the Institute of Space and Astronautical Science (ISAS).

That target marker carries thousands of signatures from people all over the world. It is not immediately clear what happened with the Hayabusa spacecraft during its first run at gathering specimens of the asteroid.

Hayabusa is now safe and sound, said Kazuya Yoshida, director of the aerospace engineering department at Tohoku University. His is also a member of the Space Robotics Laboratory team at the university that took part in Hayabusa's design and development.

"What we can confirm by now is that Hayabusa successfully released the target marker, a bright small ball with 880,000 names of people at 5:46 a.m. Japan Standard Time at the altitude of 40 meters," Yoshida said. "The marker is supposed to be down on the asteroid's surface at around 5:50 a.m."

Professor Yoshida said that Hayabusa was smoothly descending toward Itokawa looking at the target marker until roughly 55 feet (17 meters) from the surface.

After this point the spacecraft's control was switched to a surface-following mode and monitored by low-gain communication, Yoshida told SPACE.com. The spacecraft closed in on surface, dropping to vicinity above the asteroid of 33 feet (10 meters), perhaps lower, he said.

Hayabusa remained over the Itokawa for a much longer duration than expected, Yoshida explained. An ascending command was sent for the spacecraft to lift off from Itokawa's surface.

"So far the touchdown or the projector ejection [firing of a pellet to impact the asteroid's surface] has not been confirmed," Yoshida added. "Detailed data about what happened at the vicinity of the surface will be brought out through the high-gain communication after the three axis attitude control [of the spacecraft] is reestablished."

Yoshida said that if no touchdown sampling is confirmed, another attempt will be scheduled following analysis of what took place during the first try.

According to earlier reports that quoted JAXA officials, Hayabusa descended to just 56 feet (17 meters) before operators at Japan's Deep Space Control Room of ISAS/JAXA lost contact with the probe for several hours. Hayabusa was thought to have eased back from the asteroid by several miles, with mission controllers apparently eyeing another landing attempt late next week.

Hayabusa has returned a wealth of asteroid imagery and other data. But the mission has been far from glitch-free, underscoring the complex nature of its assigned duties.

For example, a tiny robot lander that was released on November 12 by Hayabusa was intended to hop about on the asteroid. The ultra-small device was dispatched too high above Itokawa and did not reach the asteroid - floating off into free space.

Hayabusa's challenging mission is designed to return to Earth samples of the asteroid Itokawa to Earth. The irregularly-shaped Itokawa is a small asteroid, measuring just 1,800 feet long (549 meters) by 590 feet (180 meters) wide.

The spacecraft's delicate maneuvering around Itokawa is being carried out nearly 180 million miles (288,923,070 kilometers) away from Earth.

If all had gone well, Hayabusa would have snagged asteroid samples via a horn-shaped tube that gently makes contact with the rocky mini-world. During the spacecraft's brief encounter with the asteroid, a small metal ball fired from the spacecraft would strike the space rock's surface at very high speed. Pieces of asteroid stirred up by the impact were to be caught in a canister attached at the top of the horn.

After its brief touchdown, Hayabusa would have then retreated to a higher altitude above the asteroid and prepared to make another catching dive for specimens on November 25.

The return-to-Earth clock is ticking for Hayabusa. It needs to propel itself away from Itokawa by early December to place itself on a correct path to reach Earth.

Once Hayabusa swings back to the vicinity of Earth in June 2007, the spacecraft's sample-carrying container would be released, then land under parachute in a stretch of desert at Woomera, Australia.

Hayabusa arrived at asteroid Itokawa on September 12 of this year. It was rocketed into space from Japan's Kagoshima Space Center on May 9, 2003.