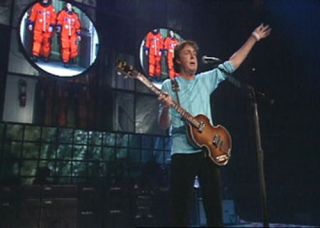 "We want tosay hi to you, we want to say good morning," McCartney said to the station's Expedition12 crew. "I can't believe we're actually transmitting to space, this issensational."

"It's suchan honor for you to join us," said McArthur after performing a pair ofweightless somersaults aboard the station. "We're so thrilled that you canparticipate in our flight."

"We'd liketo wake you up to a little bit of 'English Tea,'" McCartney told McArthur - of NASA- and Russian cosmonaut Tokarev, who sipped from breakfast drink bags duringthe performance. "What's that you got there in your tea Valery, a little vodka?"McCartney joked.

"It's alittle early today," answered Tokarev with a smile.

McCartneyalso performed "Good Day Sunshine" for the ISS crew, a song that NASA used torouse the seven astronauts aboard the space shuttle Discovery during the finalday of their STS-114 return toflight mission.

"We're veryproud to say that on the morning that NASA told them they were clear to comehome to the Earth," they played that song, McCartney said. "We send our lovefrom Earth."

McArthurand Tokarev are more than one month into a six-month mission aboard the ISS. Theyhave performed one of at least two planned spacewalks and will take a brief rideoutside the ISS next week to move their Soyuz spacecraft from one berth toanother.

"I thinkthis audience just wants to give you thanks for everything your doing and for joiningus here tonight," McCartney said. "We wish you all the best for the rest ofyour mission. We can't wait to meet you when you get back down to Earth."

"That was alot of fun," McCarthur said after the concert link up.

ISS flightcontrollers told the NASA astronaut that his wife and two daughters werepresent at mission control in Houston for the even and were more than happywith McCartney's invitation to say hello.

"I suspectthey enjoyed that even more than we did," McArthur said.