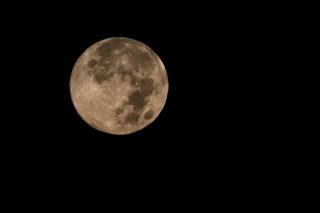 The first photos are starting to appear from today's (Aug. 31) blue moon, the last such sight until 2015.

A blue moon is the name given to the second full moon in a single month, a rare occurrence that won't happen again for three years.

Though blue moons don't actually appear blue, one stargazer named Tom Sajinsa whimsically tinted the moon blue in a photo he took of the full disk this morning from New York City.

The moon technically became full at 9:58 a.m. EDT (1358 GMT), marking the second time in August that it's reached full phase. The month's first full moon occurred Aug. 1. But to the average night sky stargazer, the moon can still appear full in the day before and after the actual full moon time.

Angela Saeki captured the moon from her balcony on the 34th floor of an apartment building in Osaka, Japan.

"The one photo with the blue moon over Osaka City glittering with its light is my favorite," Saeki told SPACE.com in an email. "It's making it a city of jewels instead of the concrete jungle it is known for!"

And some skywatchers were caught by the significance of this rare celestial sight less than a week after the Aug. 25 death of space icon Neil Armstrong, the first man to walk on the moon.

David Stockinger took a photo of the blue moon from Minot, North Dakota.

"I couldn't help but think, 'Here's to you, Neil — the kinda guy who only comes around 'once in a blue moon,''" Stockinger said.

If you snap photos of the blue moon and would like them to be considered for a possible story or gallery, please send them to SPACE.com assistant managing editor Clara Moskowitz at cmoskowitz@space.com.