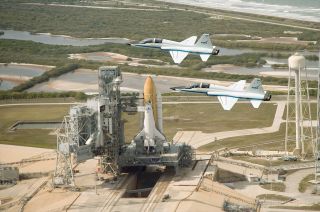 NASA is deploying a few high-flying paparazzi to Hollywood to scout out the best photo spots for next month's arrival of one of its biggest stars: space shuttle Endeavour.

Meanwhile on the East Coast, tickets have just gone on sale for the public to stake out their own photo ops to see Endeavour as it departs its Florida spaceport for the final time. Endeavour, which flew 25 times to space, is being ferried to Los Angeles for display at the California Science Center.

On Saturday (Aug. 25), two NASA jets — a T-38 astronaut trainer and an F-18 Hornet — will circle the skies over Los Angeles at an altitude of approximately 1,500 feet (18,000 meters). The jet flights, which are in cooperation with the Federal Aviation Administration, have been described by NASA as only "to capture photographic imagery."

But it's no secret that the aircraft are part of the advance entourage for Endeavour. The retired orbiter, flying atop the space agency's modified Boeing 747 Shuttle Carrier Aircraft, is scheduled to land at Los Angeles International Airport (LAX) on Sept. 20.

Before touching down, the jumbo jet carrying Endeavour is expected to make several scenic flyovers of the L.A. area, setting up the possibility for some iconic shots to be taken of the shuttle soaring past famous landmarks like the Hollywood sign. Saturday's jet flights will scope out the best flight paths to capture those photos. [Photos: How Shuttle Endeavour Was Made]

NASA photographers embarked on a similar set of flights before Endeavour's older sister, space shuttle Discovery, arrived in Washington, D.C. in April. Two T-38 training jets were dispatched to the nation's capital to plot the shuttle's path, which later led to photos of Discovery flying past the Capitol Building, Washington Monument, White House and other historic landmarks.

Details on when, where and how to see Endeavour arrive in Los Angeles have not yet been announced, nor have any of the potential flyover locations along the shuttle's trip from Florida to California. Tickets however, went on sale Friday (Aug. 24) to see Endeavour depart its launch and landing site for a final time.

NASA's Kennedy Space Center Visitor Complex will host four days of activities leading up to the scheduled takeoff of Endeavour atop the Shuttle Carrier Aircraft on Sept. 17 at approximately 7:30 a.m. EST (1200 GMT).

With general admission, the public can view the space shuttle ferry flight as it passes over the visitor complex. A limited number of $40 tickets (in addition to the general admission) will take guests out to NASA's Shuttle Landing Facility (SLF), for a runway-side seat to view Endeavour take off on its ferry flight to California.

The Visitor Complex is also offering a $20 tour (in addition to the general admission) on Sept. 14 and 15 that will offer guests a "windshield view" of Endeavour as it is mated to the Shuttle Carrier Aircraft. The special tour will also drive by Endeavour's launch pads.

Other activities include a chance to see Endeavour's final astronauts, the crew of the 2011 STS-134 mission, during their visit to the visitor complex.

Endeavour is the last of NASA's retired shuttles to take to the air.

In April, the fleet leader Discovery and the prototype test orbiter Enterprise were ferried to Washington, D.C. and New York City, respectively. Atlantis, which is destined for the Kennedy Space Center Visitor Complex, will be moved the short distance over land in November.

Endeavour will embark on a similar, if not longer road trip once in Los Angeles. For two days beginning on Oct. 12, the shuttle will be paraded atop a modified NASA wheeled transporter through the streets of Inglewood and L.A.

By dusk on Oct. 13, Endeavour is expected to be inside the California Science Center's newly constructed Samuel Oschin Display Pavilion.

Endeavour's exhibit will open to the public on Oct. 30. The pavilion is a temporary display however, as the science center plans to ultimately house Endeavour in its planned Samuel Oschin Air and Space Center, targeted to open in 2017.

For its permanent display, Endeavour will be mounted as it was on the launch pad with side-mounted rockets and a replica of its external tank. In preparation for that exhibit, a pair of the shuttle's solid rocket boosters were scheduled to arrive on Friday at Edwards Air Force Base in Southern California, where they will be held until the science center is ready.

The two 149-foot long (45-meter) boosters were previously on display at the Kennedy Space Center Visitor Complex, from where they were trucked to California.