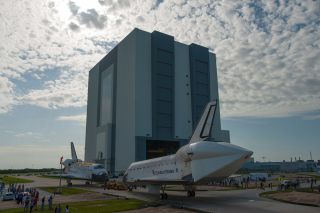 Two space shuttles traded places at NASA's Kennedy Space Center on Thursday (Aug. 16) for what was planned to be the final multiple shuttle shuffle of the retired program.

Shuttles Atlantis and Endeavour paused briefly for nose-to-nose photos as they were moved between the Vehicle Assembly Building (VAB) and orbiter processing facility (OPF) at the Florida spaceport.

Atlantis, which had been parked inside one of the high bays in the 52-story tall VAB since June 29, was moved into the OPF to complete its transformation from a space-worthy shuttle to a museum-safe display. The last of NASA's orbiters to fly into space, Atlantis is scheduled to be delivered to the nearby Kennedy Space Center Visitor Complex for its public exhibit on Nov. 2.

Endeavour made the opposite trip, moving from the processing hangar to the empty assembly building, to await its flight to the West Coast, where it is destined for display at the California Science Center. With its museum modifications now complete and its aerodynamic tail cone attached, Endeavour will be flown atop NASA's modified Boeing 747 Shuttle Carrier Aircraft (SCA) to Los Angeles International Airport (LAX) next month. [Gallery: Space Shuttles Trade Spaces]

Although the Kennedy Space Center has more than one orbiter-sized hangar, the shuttle swap on Thursday was necessary as only one OPF is still open in support of the retired winged spacecraft.

The Boeing Company is moving into Orbiter Processing Facility-3 to support its efforts to build a new space capsule, called the CST-100, to potentially fly American astronauts to the International Space Station.

OPF-1 was closed after Atlantis left for the VAB in June, so it too could be leased for use, though it currently remains without a tenant. Atlantis was instead moved into OPF-2, which was vacated by Endeavour on Thursday.

Atlantis and Endeavour are the last two remaining shuttles at the Kennedy Space Center. Their sister ship, Discovery, was delivered to the Smithsonian for display at the National Air and Space Museum's Steven F. Udvar-Hazy Center in northern Virginia in April.

Endeavour will be the next one to depart its launch and landing site for the final time.

Ferry flight preparations are expected to get underway on or around Sept. 14 with the rollout of Endeavour to Kennedy's Shuttle Landing Facility, where it will be mated atop the SCA jumbo jet. Endeavour is targeted to leave Florida on Sept. 17 and arrive in Los Angeles on Sept. 20.

The shuttle carrier aircraft's refueling stops and ceremonial flyovers along the way to California have yet to be publicly announced.

Once on the ground in Los Angeles, Endeavour will spend two weeks at LAX as it is hoisted off the carrier aircraft by crane and loaded onto an overland transporter. The shuttle will then embark on a slow road trip to the California Science Center (CSC), completing the 12-mile journey through the streets of Inglewood and L.A. on Oct. 12-13.

The CSC's new Samuel Oschin Space Shuttle Endeavour Display Pavilion is set to open to the public on Oct. 30.

Atlantis meanwhile, will forgo the 747 ferry flight and instead leave Kennedy atop a wheeled transporter for its short drive to the spaceport's visitor center, where a new $100 million display building is now under construction. Set to be displayed as if it was flying in space again, Atlantis' move on Thursday was expected to be the last time it would roll on its own landing gear wheels.

The Kennedy Space Center Visitor Complex's Atlantis Exhibit is slated to open to the public in July 2013.