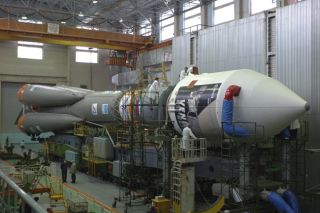 European scientists arereasonably confident their Venus Express spacecraft will launch to Earth'snearest neighbor before the tight window of opportunity when the planets arealigned slams shut in a few weeks.

The mission was supposed toblast off Wednesday from Baikonur Cosmodrome in Kazakhstan. But contaminationfound on the satellite forced launch preparations to stop, putting VenusExpress into an unplanned holding pattern.

The spacecraft was alreadymated to its Soyuz rocket inside an assembly building in advance of beingrolled to the launch pad. Then came the discovery of some insulation materialthat had come off the Fregat upper stage and was floating free inside therocket's nose cone where Venus Express sat encapsulated for launch.

Over the weekend, theFregat and spacecraft still tucked inside the nose cone were detached fromthe Soyuz for train transport to another facility 25 miles (40 kilometers)away. The shroud was opened Monday, enabling inspections of Venus Express bytechnicians to determine if any damage had occurred by the insulation.

European Space Agency (ESA)officials said Tuesday that the spacecraft appeared to be in good health.

"The scenario is sofar very encouraging, as only fairly large particles, pieces of the insulatingmaterial initially covering the launcher's Fregat upper stage, have been foundon the body of the spacecraft," ESA said in a press statement.

"These have been easyto identify by naked eye or with UV lamps, and are being carefully removed withtweezers, vacuum-cleaners or nitrogen gas airbrushes, according to size."

The cleaning will continuefor the next few days, followed by re-installation of the nose cone andtransfer back to the Soyuz rocket's assembly building.

Although a new launch datehas not been set, liftoff is expected to be targeted for sometime betweenNovember 6 and 9. Venus Express must launch by November 24 to catch thenecessary trajectory from Earth to its destination.

"The ESA Project teamis confident that Venus Express will be launched well within the launchwindow," the press statement said.

The probe should reachVenus five months after launch. It will fire the onboard main engine to enterorbit around the planet for the most comprehensive examination of themysterious Venusian atmosphere and new observations of its surface.

"There are so manyinteresting questions about Venus. For example, why is the atmosphere rotatingso fast around the planet while the planet itself is rotating so slowly? Webelieve that long ago the temperature was much less than now and that water wasflowing on Venus, but how and when did it disappear?" said H?kan Svedhem, the Venus Express project scientist.

"The whole surface ofVenus has not long ago (in geological terms) been completely changed bymaterial from the interior streaming out through volcanoes and cracks in thecrust. Is this process still active somewhere on the planet?

"Perhaps the mostfascinating question about Venus is that Venus was once quite similar to Earth,but now the two planets are very different. Why are they so different now andwhen did this change start?"

Venus Express will fly in ahighly elliptical orbit looping from 155 miles (249 kilometers) at its closestpoint to 41,000 miles (65,983 kilometers) at the most distant. The EADSAstrium-built craft carries seven instruments mostly derived from Europe's MarsExpress and the Rosetta comet mission.