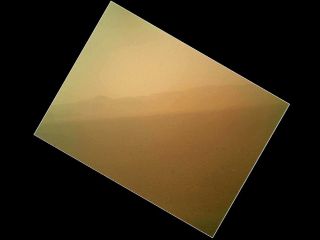 This photo taken by NASA's Mars rover Curiosity shows the north wall and rim of Gale Crater. The image is the first color photo snapped by Curiosity's Mars Hand Lens Imager (MAHLI) on the afternoon of the first day after landing. NASA released the image on Aug. 7, 2012.
(Image: © NASA/JPL-Caltech/Malin Space Science Systems)

NASA's Mars rover Curiosity has snapped its first color photo of the Martian landscape using a camera that is still packed away on its long robotic arm.

The new Mars photo reveals a view of the terrain north of the Curiosity rover, and shows the north wall and rim of Gale Crater in the distance, NASA officials said in an image description today (Aug. 7).

Curiosity touched down on the Red Planet on the night of Aug. 5 (PDT; Aug. 6 EDT) inside Gale Crater, a sprawling impact basin that stretches 96 miles (154 kilometers) across. While a camera on the rover's underbelly snapped hundreds of color photos of Mars from above during the descent, the new image is the first color view from Curiosity on the ground.

The rover's first color surface photo was taken by the Mars Hand Lens Imager (MAHLI), which is located on a turret at the end of the rover's robotic arm. Curiosity snapped the photo on the afternoon of its first day after landing, which mission controllers label Sol 1 to mean the first Martian day of operations. Sol 1 began on Aug. 6, according to NASA officials.

At this time, Curiosity's robotic arm is still stored the way it was when the spacecraft launched into orbit on Nov. 26, 2011. The robotic arm will be extended in upcoming days as Curiosity's mission team performs checks of the rover's systems. Later today, Curiosity is expected to raise its camera-tipped mast, which can take high-resolution images of Mars, as part of those checks.

A removable dust cover over the MAHLI is apparently coated with Martian dust kicked up during the rover's descent, giving the image its slightly fuzzy appearance. Mission managers are planning to take photos without the transparent dust cover in place in the coming weeks, as they continue checking out the rover's various instruments and system.

This newly released image was snapped with the MAHLI's dust cover closed. With the robotic arm still packed away, the MAHLI looks out from the front left side of the rover, and is in a position that is rotated 30 degrees relative to the deck of the rover, NASA officials explained. This image has been rotated to correct that tilt, so the sky is "up" and the ground is "down" when viewing the landscape.

Curiosity's MAHLI camera is designed to capture detailed, high-resolution images of rocks and soil. The camera's sharp focus makes it capable of taking photos of small objects up close, as well as sprawling Martian landscapes.

The $2.5 billion Curiosity rover is expected to spend at least 98 weeks (two Earth years) exploring Gale crater during its primary mission. The robot is the largest rover ever sent to Mars and carries a sophisticated set of instruments to determine if Mars can now, or could ever in the past, be habitable for microbial life.