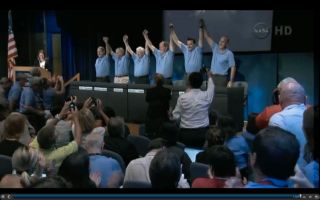 PASADENA, Calif. — They entered the room like rock stars coming back onstage for an encore, or like heroes returning from a war.

The leaders of the team that put NASA's huge Curiosity rover safely on the surface of Mars received a raucous and lengthy standing ovation as they filed in for a post-landing press conference here at NASA's Jet Propulsion Laboratory (JPL) Sunday night (Aug. 5).

The excitement was understandable, for the team had just pulled off an unprecedented, daring and nerve-wracking touchdown on the Red Planet. In a maneuver that had never been attempted before on another world, a rocket-powered sky crane lowered the 1-ton rover to the Martian surface on cables, then flew off to crash-land intentionally a safe distance away.

Landing Curiosity successfully "was by any measure the most challenging mission ever attempted in the history of robotic planetary exploration," Holdren said. "So congratulations again, and long live American Curiosity!"

Then ecstatic chaos reigned again, as Curiosity's entire entry, descent and landing team came in to another standing ovation and chants of "EDL! EDL! EDL!"

Dozens of engineers made a circuit of the room, shaking hands and exchanging high-fives with the luminaries on the podium and the reporters and assorted guests in the crowd. The exuberant display continued for 10 minutes or so before JPL director Charles Elachi pleaded for calm and quiet so the press conference could continue.

The mood then shifted again, to one of reflection and reverence in contemplation of a great achievement. Several speakers stressed the importance of the night's events for NASA's planetary exploration efforts, and for the nation as a whole.

"There are many out in the community who say that NASA has lost its way, that we don't know how to explore, that we've lost our moxie," said John Grunsfeld, associate administrator for NASA's Science Mission Directorate. "I think it's fair to say that NASA knows how to explore, we've been exploring, and we're on Mars."

Adam Steltzner of JPL, the leader of Curiosity's EDL team, seemed to fight off tears several times when the microphone came his way.

"I am terribly humbled by this experience," he said. "In my life, I am and will be forever satisfied if this is the greatest thing that I have ever given."

Steltzner and his wife are expecting a baby girl — their second child — in about three weeks. Steltzner said he won't name her Curiosity, though he was immediately smitten by the name when he read it among a list of schoolchildren's submissions several years ago. (NASA held a naming contest in late 2008, asking students to provide a moniker for the rover more endearing than MSL, short for the mission's official name, Mars Science Laboratory.)

Then Steltzner asked one of the night's special guests to stand up and be recognized — Clara Ma, who proposed the name "Curiosity" as a sixth-grader more than three years ago. Ma rose and smiled shyly, and the crowd went nuts again.

With Curiosity safely on the surface, in the middle of Mars' huge Gale Crater, the mission can now look forward to surface operations. The rover's main goal is to determine if the Gale area is, or ever was, capable of supporting microbial life.

Curiosity will spend at least the next two years trying to answer this question. The mission's chief scientist John Grotzinger, a geologist at Caltech, is thrilled to finally have the keys.

"To me, that was magical. Everything just went so smoothly," he told SPACE.com, referring to the landing. "I'm over the moon."