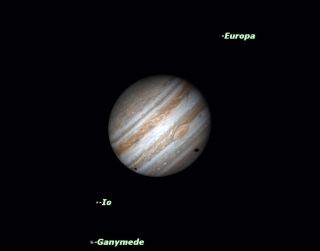 The shadows of Jupiter's moons Io and Ganymede cross the face of Jupiter on the morning of August 6, with the Great Red Spot in the background.
(Image: © Starry Night Software)

Jupiter is by far the most interesting planet to see through a telescope, and on Monday morning (Aug. 6), night sky observers will be treated to an impressive dance between the gas giant and its moons.

Through a telescope, Jupiter's turbulent atmosphere is constantly fascinating, and its four brightest moons are always intriguing as they circle around the planet, passing behind and in front, casting their shadows on Jupiter's cloud deck, or disappearing themselves into its mighty shadow.

On Aug. 6, depending on where you live, you can see two moon shadows and watch two moons cross Jupiter's face.

At this time of the year, Jupiter has only recently emerged from behind the sun, so there's only a narrow window during which Jupiter can be observed in any one location. This window covers the period after Jupiter is high enough above the horizon to be clearly seen, and before the sky is lit up by the rising sun. [Amazing Night Sky Photos: Jupiter, Venus & the Moon]

Jupiter reaches an altitude of 15 degrees at around 2:30 a.m. local time, and the sun rises at around 6:30 a.m., so each time zone has a roughly 4-hour window to observe Jupiter. (Remember that your clenched fist held at arm’s length measures roughly 10 degrees.)

Here are the predicted times for night sky events involving Jupiter and its moons for the morning of August 6. We've only shown the times visible for each time zone, so that you can tell what part of the events is visible from your location.

The Great Red Spot will also be on the disk, but it will appear much fainter than the shadows of the moons, and may not be visible in your telescope. Io's shadow will be much smaller than Ganymede's, so it may not be easy to see.

Ganymede's shadow will move off Jupiter at 4:38 a.m., leaving Io's shadow all alone. At 5:18, Io itself will move onto Jupiter's disk. For a few minutes it will look like a bright pinpoint against the darker edge of Jupiter's disk, and you will get a three-dimensional effect with the moon on the left and its shadow on the planet to its right. Then, Io will vanish against the bright backdrop of Jupiter's clouds in all but the largest telescopes.

At this point observers in the Eastern time zone will find their skies flooded with sunlight, and Jupiter will be lost to view.

But, the show will not over for viewers further west. The moons Io and Ganymede will continue to move from left to right for observers in these time zones.

When Ganymede follows Io onto Jupiter's face at 4:42 a.m. it will first appear as a bright dot, then will fade to invisiblity like Io. Then, surprisingly, Ganymede will reappear as a dark grey spot, almost as dark as its shadow was. This is because Ganymede has a rather dark surface as compared to Io or Jupiter.

Viewers on the West Coast will miss the beginning of the show, but will catch the later parts of the night sky event.