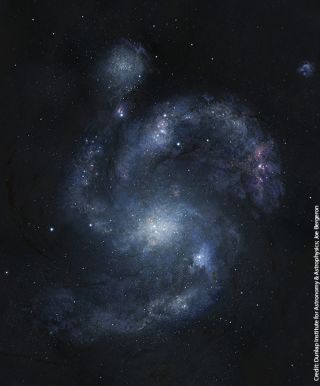 An artist’s rendering of galaxy BX442, which is 10.7 billion light-years from Earth, and its companion dwarf galaxy (upper left).
(Image: © Dunlap Institute for Astronomy & Astrophysics/Joe Bergeron)

Astronomers have discovered the universe's most ancient spiral galaxy yet, a cosmic structure that dates back roughly 10.7 billion years, a new study reveals.

The galactic find, discovered by researchers using NASA's Hubble Space Telescope, comes as something of a surprise. Other galaxies from such early epochs are clumpy and irregular, not strikingly symmetrical like the newfound spiral, which broadly resembles our own Milky Way.

"The fact that this galaxy exists is astounding," study lead author David Law, of the University of Toronto, said in a statement. "Current wisdom holds that such ‘grand-design’ spiral galaxies simply didn’t exist at such an early time in the history of the universe."

Law and his colleagues used Hubble to snap photos and study the properties of about 300 distant galaxies. The newfound galaxy, which goes by the name BX442, was the only spiral in the bunch, researchers said.

BX442's light has taken about 10.7 billion years to reach us, meaning astronomers are now seeing it as it looked just 3 billion years after the Big Bang that created the universe. [Big Bang to Now in 10 Easy Steps]

Today, spiral galaxies like our own Milky Way are common throughout the cosmos. But that wasn't the case long ago, when galaxy collisions were much more common, gas raining in from the intergalactic medium fed more dramatic star formation and black holes grew faster than they do now, researchers said.

"The vast majority of old galaxies look like train wrecks," said co-author Alice Shapley of UCLA. "Our first thought was, why is this one so different, and so beautiful?"

To learn more about BX442, the team employed a different telescope, the Keck Observatory atop Hawaii's dormant Mauna Kea volcano. They used a Keck spectrograph to study light emitted from 3,600 targets in and around the Milky Way.

This information confirmed that BX442 is indeed a rotating spiral, and not two disk-shaped galaxies that happened to line up in the image.

"We first thought this could just be an illusion, and that perhaps we were being led astray by the picture," Shapley said. "What we found when we took this spectral image of this galaxy is that the spiral arms do belong to this galaxy; it wasn’t an illusion. It’s rotating and has spiral arms. Not only does it look like a rotating disk galaxy — it really is. We were blown away."

The Hubble and Keck observations also revealed a companion dwarf galaxy residing near BX442. The scientists think the gravitational interaction between the two galaxies may be creating BX442's spiral shape, possibly explaining how it became so different than its galactic contemporaries. (The Milky Way has its own satellite dwarf galaxy, known as Sagittarius, that may help produce its spiral arms.)

The companion is likely to merge with BX442 eventually, researchers said. Simulations also show that BX442's spiral will probably dissipate within 100 million years or so, they added.

The astronomers plan to continue studying BX442 for further insights that could shed light on how spiral galaxies like our own Milky Way come to be.

"BX442 represents a link between early galaxies that are much more turbulent and the rotating spiral galaxies that we see around us," Shapley said. "Indeed, this galaxy may highlight the importance of merger interactions at any cosmic epoch in creating grand design spiral structure."