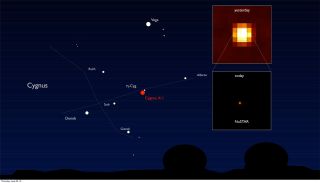 NASA's Nuclear Spectroscopic Telescope Array, or NuSTAR, has taken its first snapshots of the highest energy X-rays in the cosmos, the same kind used by doctors to take pictures of your bones. NuSTAR chose a black hole in the constellation Cygnus (shown on the left) as its first target due to its brightness. Image released June 28, 2012.
(Image: © NASA/JPL-Caltech)

NASA's newest space telescope has opened its X-ray eyes to take its first pictures of the high-energy universe, including a glimpse at a well-known black hole.

The space observatory, called the Nuclear Spectroscopic Telescope Array, launched June 13 on a mission to observe high-energy, short-wavelength X-ray light from some of the most dynamic objects in space, such as black holes and supernova remnants. The observatory extended a 33-foot (10 meters) mast on June 21 to separate its light-gathering optics from their focal point.

The $165 million telescope took its first photos June 28, directing its gaze toward a nearby black hole that is eating up a neighboring giant star. The black hole, called Cygnus X-1 is extremely bright in X-rays.

"Today, we obtained the first-ever focused images of the high-energy X-ray universe," said Fiona Harrison, the mission's principal investigator at the California Institute of Technology in Pasadena, Calif., in a statement. "It's like putting on a new pair of glasses and seeing aspects of the world around us clearly for the first time." Harrison first conceived of NuSTAR black hole-hunting mission  15 years ago.

NuSTAR's images of Cygnus X-1 are already significantly crisper than previous observations of the object, suggesting that the observatory is on its way toward fulfilling its goal of revealing some of the most mysterious parts of the universe in a whole new light. [Gallery: NASA's Black Hole-Hunting Telescope]

"This is a really exciting time for the team," said project scientist Daniel Stern of NASA's Jet Propulsion Laboratory in Pasadena, Calif. "We can already see the power of NuSTAR to crack open the high-energy X-ray universe and reveal secrets that were impossible to get at before."

NuSTAR is designed to operate for at least two years, taking X-ray pictures with 100 times the sensitivity and 10 times the resolution of telescopes that have gone before it. Scientists hope it will help resolve some of the persistent questions about black holes, such as how they form and evolve.

Though black holes themselves are invisible (even light cannot escape their gravitational grasp), matter falling into such objects can heat to temperatures as high as hundreds of millions of degrees, causing it to release copious amounts of high-energy light that can be seen from across the universe.

NuSTAR's next calibration targets will be G21.5-0.9, the leftovers from a supernova explosion that ended a star's life several thousand years ago in our own Milky Way galaxy, and 3C273, a black hole about 2 billion light-years away that is currently gorging on matter, causing it to light up and become what's known as a quasar.